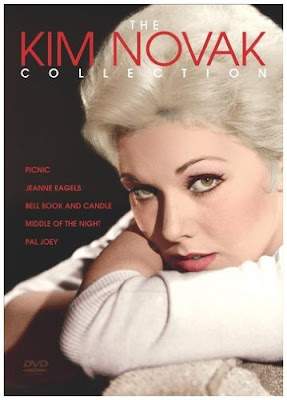 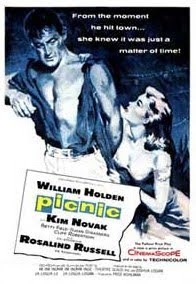 Picnic (1955). A story of an ex-college football star turned drifter who shows up in a small Kansas town on Labor Day and falls for a girl who is already spoken for. Cast: William Holden, Kim Novak, Susan Strasberg, Cliff Robertson, Arthur O'Connell, Nick Adams, Betty Field, Rosalind Russell and Verna Felton. It won two Academy Awards and was nominated for four more. Directed by Joshua Logan, Picnic made Novak a star. 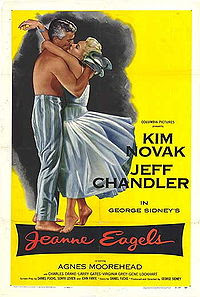 Jeanne Eagels (also title The Jeanne Eagels story) is a 1957 fictionalized biographical film of the life of stage star Jeanne Eagels, made by Columbia Pictures. It was produced and directed by George Sidney from a screenplay by John Fante, Daniel Fuchs and Sonya Levien, based on a story by Fuchs. The film stars Kim Novak and Jeff Chandler with Charles Drake, Agnes Moorehead, Larry Gates, Virginia Grey, Gene Lockhart and Murray Hamilton. 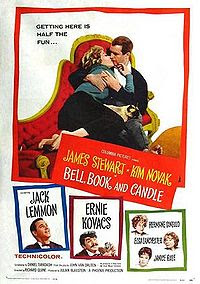 Bell, Book and Candle (1958) is a romantic comedy directed by Richard Quine based on the hit Broadway play by John Van Druten. Cast: James Stewart and Kim Novak in their second on-screen pairing (after the Alfred Hitchcock classic Vertigo, released earlier the same year). Fans of the film point to similarities between it and the earlier I Married A Witch (1942) and especially the 1960s television series Bewitched, thinking that this film may have been an inspiration.


Middle of the Night(1959). A film about a 56-year-old clothing manufacturer (March) falls in love with 24-year-old Novak, much to the dismay of both families. Future Oscar winners Martin Balsam (A Thousand Clowns, 1965) and Lee Grant (Shampoo, 1975) also star in this film. 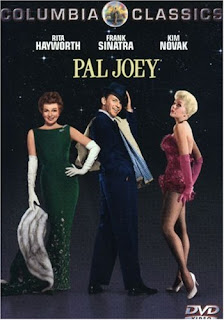 Pal Joey (1957). loosely adapted from the musical play of the same name; it stars Rita Hayworth, Frank Sinatra, and Kim Novak. Kim Novak's singing voice was dubbed by Trudy Erwin. The director is George Sidney and the choreographer is Hermes Pan. Considered by many critics as the definitive Frank Sinatra vehicle, Sinatra won the Golden Globe Award for Best Actor - Motion Picture Musical or Comedy for his role as the wise-cracking, Joey Evans. As to be expected the musical arrangements are particularly fine, with some near-perfect Nelson Riddle charts for the Rodgers and Hart standards "I Didn't Know What Time It Was," "I Could Write a Book" and "There's A Small Hotel." Pal Joey is also one of Frank Sinatra's few post-From Here to Eternity movies in which he did not receive top-billing, Sinatra deciding himself to allow Rita Hayworth this honor stating, with regards to being billed "between" Hayworth and Novak, "That's a sandwich I don't mind being stuck in the middle of." Along with being a strong box office success, Pal Joey also earned four Academy Award nominations and two Golden Globe nominations.
Posted by Dawn at 10:08 AM