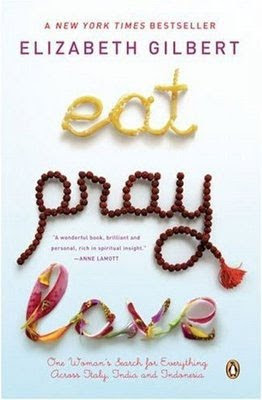 I'm so excited that they have made a movie about the book of the same name: Eat, Pray, Love: One Woman's Search for herself. 2006 memoir by author Elizabeth Gilbert. The memoir is about the author's trip around the world after her divorce, and what she discovered during her travels. She spent four months in Italy, eating and enjoying life (Eat). She spent four months in India, finding her spirituality (Pray). She ended the year in Bali, Indonesia, looking for "balance" of the two and found love (Love).

Columbia Pictures purchased the movie rights for the memoir and will produce a film version under the same title set to be released on August 13, 2010. American actress Julia Roberts is starring in the film; Ryan Murphy will direct the film. The film also stars Javier Bardem, James Franco and Billy Crudup. Actor Brad Pitt and Dede Gardner of Plan B, Pitt's production company, will produce the film.