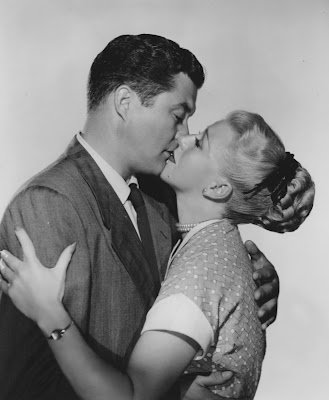 Perfect Strangers(1950). Comedy/drama. Director: Bretaigne Windust. Cast: Ginger Rogers, Dennis Morgan and Thelma Ritter. The screenplay for the Warner Bros. release by Edith Sommer was based on an adaptation of the 1939 Ben Hecht-Charles MacArthur play Ladies and Gentlemen by George Oppenheimer.

Jury members selected to sit for the Los Angeles murder trial of Ernest Craig are: Terry Scott, who is separated from her husband, David Campbell, married with two children, Lena Fassler, pregnant with her sixth child, Mrs. Isobel Bradford, a society woman and womanizer Robert Fisher.

The sequestered jury discuss over dinner, how they believe Craig murdered his wife when she refused to give him a divorce so he could marry his secretary. Terry tells the others to keep an open mind until they hear the case.

After the first day in court, the jurors return to their hotel suite. During a heated discussion of the case, Terry and David walk out to the balcony, but are soon joined by Isobel and Fisher. David and Isobel agree that when Craig had the motive for the murder, Terry accuses them of being too opinionated.

Later David walks out to the balcony where Terry, apologizes for her earlier outburst, they talk about what they would be doing if they were at home. David talks about his family, Terry talks about her lonely life since separating from her husband. They end up in each other arms for a passionate kiss.

The following day in court, the district attorney reads a love letter from Craig to Eileen, which upsets Terry. During the next break, she tells David that they should stop seeing each other.

Things look bad for Craig when his sister-in-law takes the stand saying that she heard him quarrel with his wife before she fell to her death from a cliff. After the defense presents its case, the jury begins to deliberate the verdict, David is elected foreman.

Will Terry decide to she return to Cleveland and her husband and will Graig be found Innocent?

This is a must see for all Ginger fans and among the supporting roles, Thelma Ritter delivers as always. 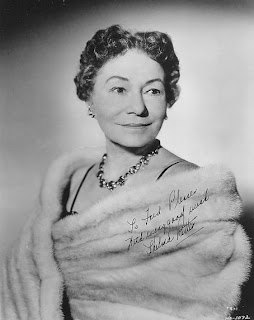 Ritter's first movie performance was in the film, Miracle on 34th Street (1947).

Ritter was also cast in the film, All About Eve (1950), which earned her an Oscar nomination.

A second nomination followed for her work in, The Mating Season (1951) starring Gene Tierney and John Lund.

Ritter performed steady for the next dozen years.

She also performed in many of the episodic drama TV series of the 1950's: Alfred Hitchcock Presents, General Electric Theater, and The United States Steel Hour.

Later film roles were as James Stewart's nurse in, Rear Window (1954) and as Doris Day's housekeeper in Pillow Talk (1959).

Although best-known for comedy roles, she performed in occasional dramatic roles, Pickup on South Street (1953) and The Misfits (1961).
Posted by Dawn at 4:40 AM