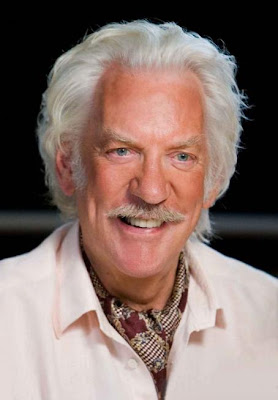 Donald Sutherland's, 50 year acting career began In the early 60s, with small parts in British films and TV, landing roles in horror films: Castle of the Living Dead (1964) and Dr. Terror's House of Horrors (1965) and twice performing in the The Saint. The episodes were directed by, Roger Moore, who later recalled that Sutherland "asked me if he could show it to some producers as he was up for an important part. They came to view a rough cut at the studio and he got The Dirty Dozen. Sutherland was cast for the first of the three war films which would be his first great successes: The Dirty Dozen in 1967, with Lee Marvin and Charles Bronson; in 1970, as the lead "Hawkeye" Pierce in Robert Altman's MASH; and, again in 1970, as tank commander Sgt. Oddball in Kelly's Heroes, with Clint Eastwood and Telly Savalas. An offbeat 1970 war film about a group of World War II soldiers who go AWOL to rob a bank behind enemy lines. During his time in England Sutherland also performed in The Avengers in 1967, in an episode titled "The Superlative Seven."
Posted by Dawn at 6:55 AM