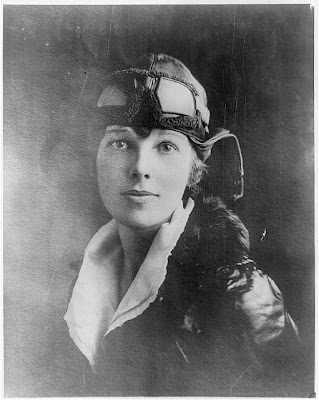 Amelia Mary Earhart, was an American aviation pioneer and author. Earhart was the first woman to receive the Distinguished Flying Cross, awarded for becoming the first aviatrix to fly solo across the Atlantic Ocean. She set many other records, wrote books about her flying experiences and was instrumental in the formation of The Ninety-Nines, an organization for female pilots. Earhart joined the faculty of the world-famous Purdue University aviation department in 1935 as a visiting faculty member to counsel women on careers and help inspire others with her love for aviation. She was also a member of the National Woman's Party, and an early supporter of the Equal Rights Amendment.

During an attempt to make a flight of the globe in 1937 in a Purdue-funded Lockheed Model 10 Electra, Earhart disappeared over the central Pacific Ocean near Howland Island. Fascination with her life and disappearance continues to this day through Movies and television:

The 1943 Rosalind Russell film Flight for Freedom derived from a treatment, Stand by to Die, was a fictionalized treatment of Earhart's life, with a heavy dose of Hollywood World War II propaganda.


In the climax of the 1977 science fiction film Close Encounters of the Third Kind, Amelia Earhart is seen walking out of the Mothership, along with a crowd of a hundred other alien abduction survivors. Director Steven Spielberg has acknowledged that this was specifically a nod to the legacy of Earhart and other flyers who mysteriously vanished at sea.


The documentary Amelia Earhart: The Price of Courage (1993) from American Experience. 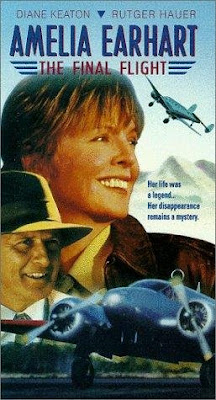 Earhart as one of many humans abducted by an alien race in 1937, only to be found in cryo-stasis on a planet on the other side of the galaxy, is portrayed by Sharon Lawrence in the Star Trek: Voyager episode "The 37's" (first aired 1995).Dialogue from the episode states that the flight was, in fact, espionage - the fact that such top-secret information had become common knowledge was the first thing that made her realize that the Voyager crew's tale of another planet, and in the future, might actually be true.

Stock footage of Earhart is shown in the opening sequence for the full broadcast run of Star Trek: Enterprise (2001–2005).


Actress Jane Lynch was cast as Amelia Earhart in the 2004 film The Aviator, but her scenes were cut.


Academy Award nominee Amy Adams portrayed Earhart in Night at the Museum 2: Battle of the Smithsonian (2009).


In Amelia (2009), Amelia Earhart is portrayed by Hilary Swank, who also served as co-executive producer of the biopic.