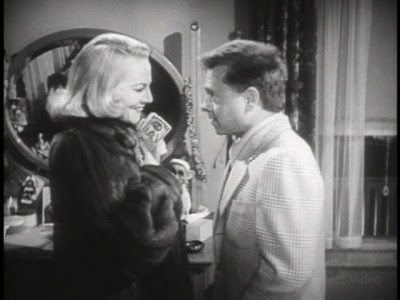 Quicksand (1950). Cast: Mickey Rooney and Peter Lorre. The film has been described as "film noir in a teacup".

Auto mechanic Dan Brady, just told his friend Chuck that he has broken up with Helen Calder, when he notices the blond cashier, Vera Novak. Dan asks Vera to go out with him, but when he returns to the garage, he remembers that he is broke. While making change at the register, Dan decides to borrow twenty dollars, planning on pay it back the next day when he is paid back the money that Buzz Larson, owes him. That night, he and Vera go to the Santa Monica pier, and she tells him she used to work in the arcade managed by Nick.

The next day, Dan is unable to find Buzz, and the bookkeeper arrives two days ahead of schedule, Dan buys an expensive watch on credit and pawns it, racing back to the garage just in time to replace the money.

The next day, an investigator comes to the garage looking for Dan and tell him if he does not pay the jewelry store within twenty-four hours, he will be arrested for grand larceny.

That night, Dan goes to a bar on the pier, where he notices drunken Shorty McCabe, who runs the bingo parlor, has a wallet full of cash. Dan follows Shorty and robs him, but is seen by a witness whose screams bring the police. Dan goes to the arcade to meet Vera, and when he finds Nick putting his hands her, he knocks him down, leaving behind the handkerchief he used during the robbery.

The next day, Nick calls Dan and says he knows about the robbery, and demands a new car in exchange for the handkerchief.

Desperate, Dan steals a car from the garage, his boss Mackey tells Dan that he was seen taking the car, and threatens to go to the police. Dan goes to Vera with his problems and she suggests that they steal the money from Nick's office. They are able to pay off Mackey and Vera spends half of the money on a mink coat. Every time Dan tries to get out of trouble he finds himself deeper into... Quicksand. You have to watch to see what happens next.
Click to view the movie Quicksand.

I'm not really a Mickey Rooney fan. But I did enjoy him in the film, Quicksand. Overall, it's a wonderful film although is starts slowly but gets better and better as the story unfolds.
Posted by Dawn at 3:53 PM