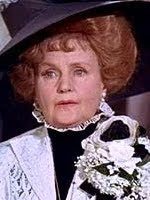 Moyna Macgill, was an Irish stage and film actress and the mother of actress Angela Lansbury and producers Edgar Lansbury and Bruce Lansbury.

Born as Charlotte Lillian McIldowie, she was the daughter of a wealthy a director of the Belfast Opera, which sparked her interest in acting. She was a teen when she was first discovered by director George Pearson, who cast her in several of his films. In 1918, she made her first performance in the play, Love in a Cottage at the West End's Globe Theatre.

Gerald du Maurier, wanted her to change her name to Moyna Macgill, she later became a leading actress, performing in comedies, melodramas, and classics with Herbert Marshall, John Gielgud, and Basil Rathbone.

Macgill, put a hold on her career following the birth of daughter Angela and twin sons Edgar, Jr. and Bruce, who is best known for his work on television, he produced the series The Wild Wild West and Mission: Impossible. When they moved into a larger house in Mill Hill, she turned their home into a place for actors, writers, directors, musicians, and artists, to meet. Which left an impression on Angela and began her interests in acting.

While in Hollywood, Moyna Macgill, mostly performed in small character parts in films and on television. She is best known for her performances in: Frenchman's Creek and The Picture of Dorian Gray (which co-starred her daughter Angela). Later she made guest performances on the television series: Studio One, The Twilight Zone, Dr. Kildare, Mister Ed, I Dream of Jeannie and My Favorite Martian.
Posted by Dawn at 4:21 AM