During my formative teenage years, I developed a fondness for the British cinema of the mid-to-late 1960s. These films spanned several genres: the serious spy film (The Deadly Affair); social satire (Nothing But the Best); quirky thriller (Bunny Lake Is Missing); and pop culture comedy (Georgy Girl). The only thing they shared was a healthy dose of cynicism and impeccable British casts. So, it seems ironic that one of my favorite films of this period is an upbeat, almost sentimental, tale starring a mainstream American actor.

In a role seemingly tailored for him, Sidney Poitier plays Mark Thackeray, a young engineer looking for a job. Unable to find one in his chosen profession, he accepts temporary employment as a teacher in an inner-city London school. It’s a bleak situation—the students are out of control, most of the teachers are burned out, and the school reflects the poverty of the surrounding neighborhood.

Thackeray’s initial attempts to reach his students fail miserably. He finally concludes that the teens act childish because they’re treated as children. He starts showing them respect and demands the same of them. He tosses out the curriculum and teaches his students about life. In the end, Thackeray becomes a teacher and his students become adults.

Cynics will no doubt criticize To Sir, With Love as simple-minded and obvious. Perhaps, it is, but the story is put across with such conviction and professionalism that it’s impossible to ignore its many charms. In particular, a subplot involving an attractive student (Judy Geeson) who develops a crush on Thackeray is handled impeccably. Its only flaw is that Poitier and Geeson have such a natural chemistry that one almost wishes a romance could work out between them (but then, To Sir, With Love would have been a very different film). 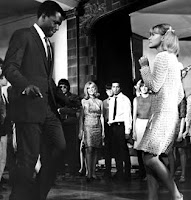 The film’s theme, sung by Lulu (who plays one of the students), became a huge hit. Director Clavell must have recognized the song’s potential—it’s heard multiple times through the picture. In one scene, it’s played over a montage of Thackeray taking his students to a museum. The scene looks very much like the world’s first music video.

Sidney Poitier is one of my favorite actors of the 1960s, with memorable performances in films like A Patch of Blue, Lilies in the Field, and In the Heat of the Night. Judy Geeson went on to play a major role in the vastly entertaining British miniseries Poldark and Poldark II. When my wife and I were in London in 1987, we saw Lulu in a production of the stage musical Peter Pan. She played Peter and she still sounded great.

* Sorry for the re post. Something went screwy when I deleted a video that was no longer available. I' am glad that I did not loose the article to cyber land. *
Posted by Rick29 at 4:36 AM

Email ThisBlogThis!Share to TwitterShare to FacebookShare to Pinterest
Labels: rick29 author, sidney poitier, the 60s, to sir with love