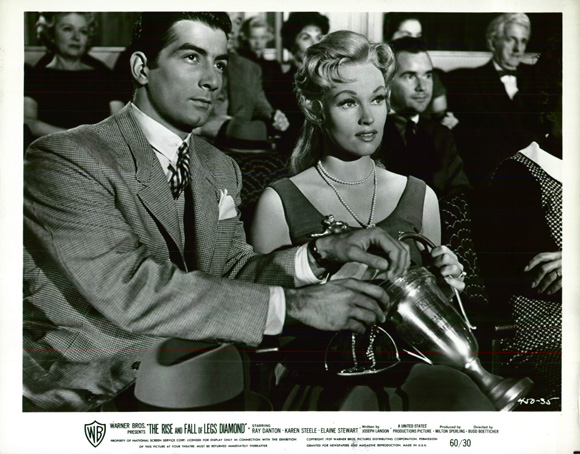 The Rise and Fall of Legs Diamond (1960). Directed by Budd Boetticher. The film debut of Dyan Cannon. It was nominated for an Academy Award for Best Costume Design.

After watching a couple of jewelry thieves gunned down by police, thief Jack Diamond asks dance instructor Alice for a date, she turn him down saying that she has entered a dance competition with Mr. La Tour. Jack, drops a garbage can injuring La Tour's foot, so that he can take his place and they win the trophy.

Video: Later that evening, he takes Alice to the movies, Jack then jumps out a bathroom window and robs a nearby jewelry store, pretending to be mopping the floor as people look in at the jewelry display. Then, quietly returns to his seat without Alice ever knowing. When the police questions the theater patrons, Jack uses the suspicious Alice as his alibi, but.. is later caught and sentenced to jail for the crime.

When he is paroled, Jack begs Alice to give him a job as her dance partner, but soon after completing his parole, Jack ups and leaves her. Wanting to avoid going back to jail, Jack tells his brother Eddie, who has tuberculous, that they will steal only from criminals and decides to become underworld gangster Arnold Rothstein's bodyguard.

Soon after, Jack and Eddie steal from a small-time money launderer and use the money to send Jack to Miami. Charging over $5,000 in goods to Rothstein's account, Jack has the gangster's bodyguards drag Jack in to see him. Although, Rothstein will not hire him, gangster Little Augie does, but... the McDermitt brothers gun down both Augie and Jack. Although, Augie dies, it is a miracle that Jack survives. Now, wanting to get even, he kills the McDermitt brothers and uses the murders to prove to Rothstein, that he should be his bodyguard.

Rothstein, then introduces him to crime syndicate bosses: Leo Bremer, Waxey Gordon, Big Harry Weston and Frenchy La Marr, who hires him, giving him the nickname "Legs." Rothstein, then tells his girl friend Monica to find out what Jack's plans are. Monica invites him over to her lavish apartment, but.. Jack, knows what she is up to and leaves.After leaving Monica's apartment, Jack listens at the hotel switchboard as Monica reports back to Rothstein.

Instead of firing him, Rothstein promotes Jack, to a collector and gives him a pocket watch as a gift. In order to learn how Rothstein's smuggles narcotics into the country, Jack has an affair with Monica, who gives him all the information that he is looking for.

When Rothstein confronts them about having an affair, Monica denies the accusation, but.. Jack admits that they have been seeing each other for two months. Rothstein, ends his relationship with Monica and frames Jack, by turning him over to the police, saying that there is heroin hidden in the watch's face. Although, Rothstein bails him out and offers him his old job back, Jack kills Rothstein and steals the black book containing all his business deals.

Walking into the Hotsy Totsy club, Jack announces to the other crime bosses, while they are eating sandwiches, that they will now pay twenty-five percent of their profits to him for protection. When they refuse, Jack destroys their businesses, with the help of one of their girlfriends with loose lips. (Dyan Cannon)

When the bosses henchmen shoot and severely wound Jack, he forces a cab driver to chase after the henchmen, who Jack then kills. Jack goes to Alice's apartment, who he has not seen in years and calls in an underworld doctor to take care of him. Jack, then tells Eddie to go to a Denver tubercular clinic, knowing that the crime bosses will be gunning for him.

Jack marries Alice, who is still in love with him. Meanwhile, the bosses send gangster Matt Moran to shoot Eddie in the legs as a warning to Jack to leave them alone. Jack, then goes to Moran's apartment and kills Moran and two henchmen. Alice tired of all the killings, turns Jack over to the police, but.. quickly learns that since they are married she cannot testify against him.

Later, Jack goes to the Hotsy Totsy Club, where he demands fifty percent of the bosses' profits and ownership of the club. After refusing to send money to Denver for treatment to save Eddie's life, Jack tells his two henchmen that he can not care about Eddie or anyone else because the bosses will use them to get to him.

Jack, decides to leave town and takes a depressed Alice to Europe. After, returning home he finds that the Hotsy Totsy Club, has closed because of the Prohibition Act. The new bosses try to convince Jack that stealing from them is bad for the underworld. Jack, still  insists on collecting protection money, warning them that he will not be stopped by any threat, not even to his wife. Because he does not care about anybody but himself.

He returns to Alice's apartment where he learns that his friends, Sal and Fats Walsh, have left him. Alice, also leaves him, saying that he is... "as good as dead now."

Later, Jack calls on Monica to come stay with him, she takes his gun and lets two henchmen know of Jack's location... Will his luck run out.. or is it true, no bullet can kill him?

I'm very surprised after watching this film for the first time, that Ray Danton didn't go on to be a major film star. If you like crime movies, I think that you will also enjoy, The Rise and Fall of Legs Diamond . The films added bonus... it is fun to see the film debut of Dyan Cannon. 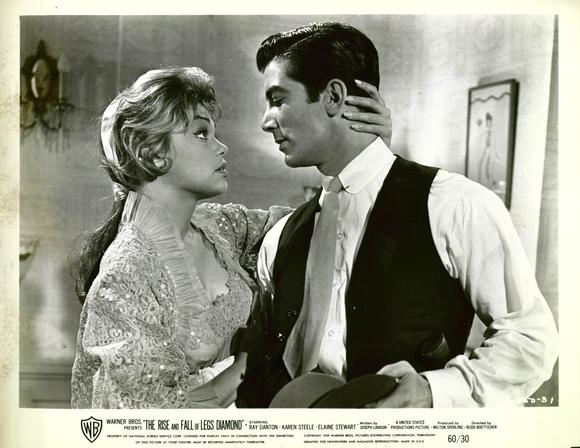 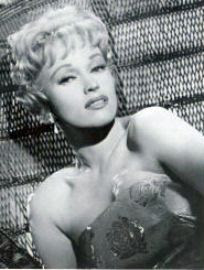 Karen Steele (March 20, 1931 – March 12, 1988). She attended the University of Hawaii and studied acting at Rollins College in Florida for a year. After that, she found work as a cover girl and model.

Steele earned her first money by spearing baby sharks in the private cove on the estate of Woolworth heiress Barbara Hutton.

Steele's first acting job was in a radio play titled Let George Do It. She subsequently appeared in the 1953 films: The Clown and Man Crazy.

The following year she landed the role of Millie Darrow in "So False and So Fair" on the television anthology Studio 57.

Her first critically acclaimed film was Marty (1955). She played Virginia and got the part because the director, Delbert Mann, confused her with an actress from New York who he and writer Paddy Chayevsky had intended to play it.

In 1958, she played the guest-star lead in the episode "Madame Faro" of Jefferson Drum, a western series starring Jeff Richards.

She appeared as Mae Dailey in the 1961 episode "Big Time Blues" on the ABC/Warner Brothers drama,
The Roaring 20's.

Earlier, she was cast in a guest-starring role in the TV series, The Alaskans, starring Roger Moore and Dorothy Provine.

Her character in "Survival of the Fattest", a 1965 episode of  Get Smart, was named Mary 'Jack' Armstrong, said to be "the strongest female enemy agent in the world". This is a reference to Jack Armstrong, the clean-cut fictional hero of Jack Armstrong the All American Boy, an adventure series broadcast on radio from 1933 to 1951.

Like many actresses, as she got older she turned to television commercials for income. She also became involved in charitable causes and community service.

In early 1970, she went on a handshake tour of service hospitals in the South Pacific. She turned down a series that would have brought her $78,000 in order to make the trip and in the process lost her agent.

In later life she settled in Golden Valley, Arizona, and married Dr. Maurice Boyd Ruland, a psychiatrist at the Mohave Mental Health Clinic. They were married until she died of cancer, aged 56. Email ThisBlogThis!Share to TwitterShare to FacebookShare to Pinterest
Labels: the 60s, the rise and fall of legs diamond (1960)