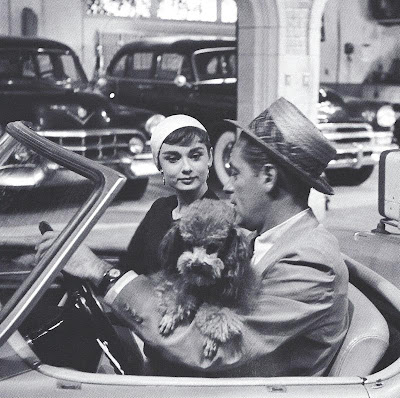 During an annual party at Oliver Larrabee's Long Island estate, the chauffeur's daughter Sabrina, follows and watches the three timed divorced David romancing a giggling socialite, on the indoor tennis court. Heartbroken, Sabrina runs, crying, back to her room. 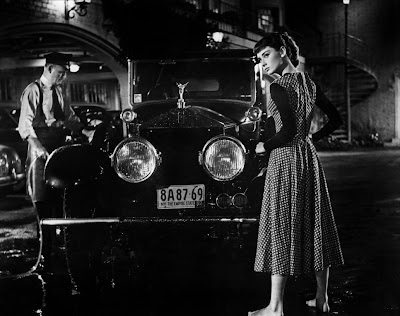 Her father Thomas, tells Sabrina to quit "reaching for the moon" and reminds her that, she is leaving for  the best cooking school in the world.

Later, in her bedroom, Sabrina writes her father a suicide note and then shuts herself in the garage and starts the engines of all eight cars. As Sabrina is beginning to feel the effect of the fumes, Linus, hears the rumbling of the engines and opens the garage to investigate. Linus, finds Sabrina coughing and asks her what she is doing there, she explains that she was testing the spark plugs. He carries her back to her bedroom and gives her a stern warning about the dangers of carbon dioxide. 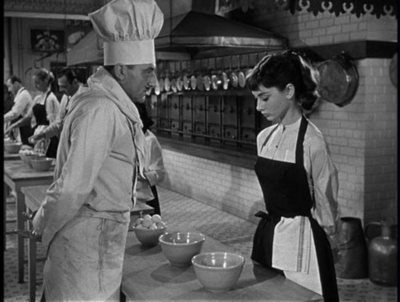 Now in Paris, Sabrina, still in love with David, struggles through her cooking classes and writes letters to her father, telling him about how she is doing in Paris, he then reads them to the rest of the staff. An elderly baron who is enrolled in the school takes charge of her, transforming her into a sophisticated woman.

David, who continues on with his irresponsible behaviors storms into Linus' New York office, angry over a newspaper article announcing his engagement to socialite Elizabeth Tyson. Linus admits that he planted the article, as he wants David to marry Elizabeth, because her father owns sugar factories in Puerto Rico and Larrabee Industries needs sugar to manufacture a new type of plastic. 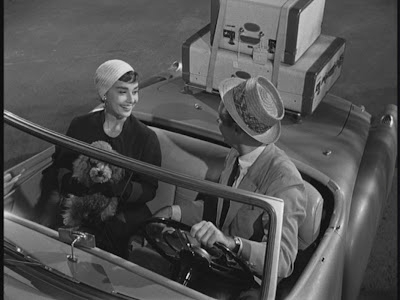 Later, Sabrina, having completed her two-year cooking course, returns to the Larrabee's Long Island estate. With a new hairdo, stylish Paris clothes and poodle dog named David, Sabrina waits for her father at the Long Island train depot and is surprised when David drives up and offers her a ride. Not recognizing Sabrina, David flirts with her and drives her all the way home before realizing who she is. David, then asks her out that night, then remembers that his family is hosting a party to announce his engagement to Elizabeth. 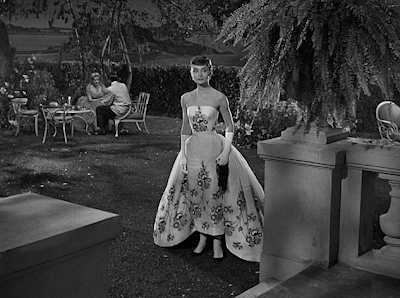 Sabrina, insists on attending, telling her father later that the moon is now "reaching for her." At the party, David slips away from Elizabeth to dance with Sabrina. David asks Sabrina to wait for him in the tennis court, but before he can leave with his bottle of champagne and glasses, he is stopped by Linus and Oliver.

It is Linus, who meets Sabrina at the tennis court. When Sabrina admits that she is in love with David, Linus pretends to be happy about the romance.

The next day, Linus takes Sabrina sailing, David thanks Linus for "taking care of" Sabrina. Elizabeth shows up to nurse him after he sat on broken glass.. Linus informs his father that he is trying to keep Sabrina from David to protect the merger. On the boat, Linus talks about his two long-lost loves and Sabrina suggests that he go to Paris to forget his troubles.

Sabrina Fairchild: Maybe you should go to Paris, Linus.

Linus Larrabee: To Paris? Sabrina Fairchild: It helped me a lot. Have you ever been there?

Linus Larrabee: [thinks] Oh, yes. Yes. Once. I was there for thirty-five minutes.

Linus Larrabee: Changing planes. I was on my way to Iraq on an oil deal.

Sabrina Fairchild: Oh, but Paris isn't for changing planes, it's... it's for changing your outlook, for... for throwing open the windows and letting in... letting in la vie en rose.

Linus Larrabee: [sadly] Paris is for lovers. Maybe that's why I stayed only thirty-five minutes.

The next day, while driving Linus to town, Thomas overhears Linus making a date with Sabrina and asks him to be "gentle" with his daughter. Linus assures Thomas, that he is sending Sabrina back to Paris, first-class, but when Sabrina arrives at his office, Linus tells her that he is sailing to Paris.

On the drive home, Sabrina sings the romantic French song "La vie en rose," and Linus hints that he is falling in love with her. 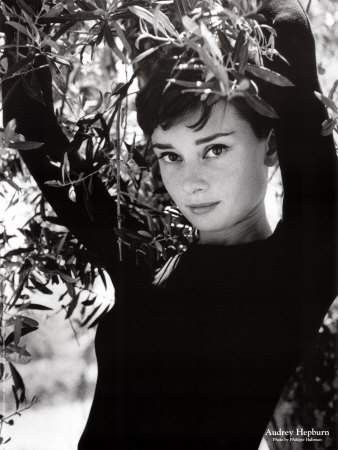 Audrey Hepburn, is very charming in this Cinderella story and you will quickly see why she was one of the most beloved actresses of her time.

Humphrey Bogart was a last minute replacement for Cary Grant. Bogart and William Holden couldn't stand each other. Bogart disapproved of Audrey Hepburn (he wanted his wife Lauren Bacall in the role), while Holden fell in love with her. Bogart got $300000, Holden got $150000, and Hepburn only $15000. Asked how he liked working with Hepburn, Bogart replied: "It's OK, if you don't mind to make 20 takes."

Although Edith Head won an Oscar for costume design, most of Audrey Hepburn's wardrobe was by Hubert de Givenchy. In fact, Hepburn chose her own clothes to wear from de Givenchy's collection. This was her first time working with the French designer, and he would become her costumer of choice for most of her career.

This was the second film in a row where Audrey Hepburn gets her hair cut as a symbol of maturity. The first was in Roman Holiday. It is also the first of four films in a row where she'd play a character romantically linked with a man old enough to be her father.

When Linus takes Sabrina to the theatre, they see the play "The Seven Year Itch", which was director/writer Billy Wilder's next movie project. The play is mentioned at least twice.

Co-stars Audrey Hepburn and William Holden fell in love during the making of this film, but Hepburn broke off the relationship on learning that Holden could not have children.

The estate on which the film was shot actually belonged to Paramount Pictures chairman Barney Balaban.

Hubert de Givenchy originally thought he would be providing wardrobe for Katharine Hepburn, as he had never heard of Audrey Hepburn before they were introduced.

Like Sunset Blvd., this film started production without a finished script. Ernest Lehman worked himself to exhaustion working on the script with Billy Wilder during production. One day, when Lehman did not have an extra copy of a scene rewrite to give to Humphrey Bogart, Bogart exploded. Wilder told his crew they would not film another foot of film until Bogart apologized to Lehman. Bogart invited Lehman to his dressing room and shooting eventually continued.

During production Billy Wilder was continuously working on the script. One day he asked Audrey Hepburn to feign illness so he would have enough time to finish the scene to be shot.

The sports car driven by the brothers is a Nash-Healey, is a two-seat sports car that was produced for the American market between 1951 and 1954. It was "America's first post-war sports car"and the first introduced in the U.S. by a major automaker since the Great Depression.

Humphrey Bogart did not get along with either of his co-stars Audrey Hepburn or William Holden, whom he nicknamed "Smiling Jim". He also said that Hepburn was quite untalented and could not act.

In addition to Billy Wilder's two mentions in the screenplay of his next project, The Seven Year Itch, there was also a line of dialogue that included the name of a film just written by Wilder's co-writer, Ernest Lehman - Executive Suite. Linus (Humphrey Bogart) uses the phrase in the sailboat scene with Sabrina (Audrey Hepburn).

Many critics felt that Humphrey Bogart was miscast in the film, and that William Holden should have played Linus with a younger actor as David. 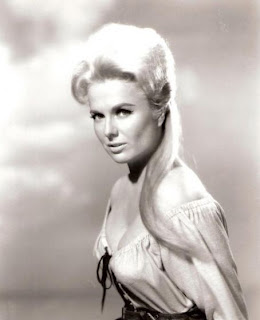 She was considered the best replacement for Grace Kelly.

She co-starred with Keenan Wynn in Bikini Beach (1964), one of the Beach Party movies with Frankie Avalon and Annette Funicello.

On television, Hyer played the part of "Hannah Haley" in the episode "Incident West of Lano" on the Western series Rawhide.

Her most significant role came as the love interest of Frank Sinatra in Some Came Running for director Vincente Minnelli in 1958, for which she received a nomination for the Academy Award for Best Supporting Actress.

Hyer was one of the actresses considered for the Janet Leigh role of the doomed Marion Crane in the Alfred Hitchcock thriller Psycho.

Her last film was, Day of the Wolves, in role of Maggie Anderson in 1971 and her last television appearance was as Peggy Hamilton in the McCloud episode "A Cowboy in Paradise" in 1974.

Hyer married producer Hal B. Wallis in 1966, and the couple remained together until his death in 1986. Her autobiography, Finding My Way: A Hollywood Memoir, was published in 1990. 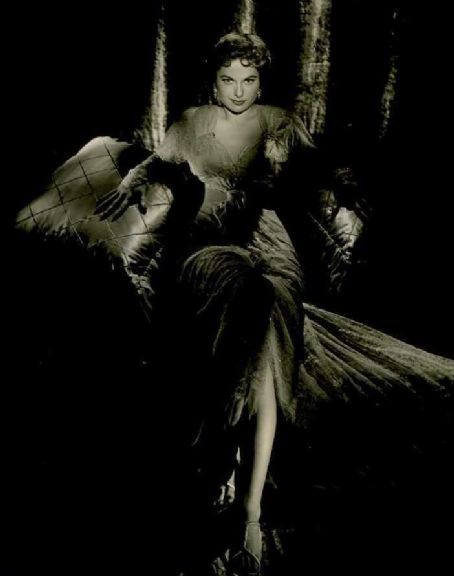