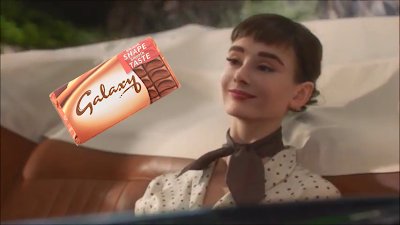 We've all seen the CGI Marylyn Monroe cameo in a Dior ad and  ta da.. we now have Audrey Hepburn, starring in a Galaxy Chocolate advertisement, with the approval of her sons Sean Ferrer and Luca Dotti, who said that their mother would be "proud" of her part in promoting this chocolate candy.

The process started with a search for the perfect Audrey HepburnTM double. The hope was to find someone who shared as many of her features and characteristics as possible.

The shoot took place at various locations along Italy’s Amalfi coast. VFX Supervisors, William Bartlett and Simon French, were both on location alongside members of the Capture Lab team to make sure all necessary tracking and lighting was correct.

The 3D team built the model of HepburnTM, making use of the star’s entire feature film catalog  plus all available press and documentary photographs as reference. However, as there was no technical lens information or measurements available for such old footage, it was an inexact science, looking at the model from every possible angle. The biggest challenges in recreating Audrey HepburnTM was the eyes and smile. I think the video turned out beautifully.