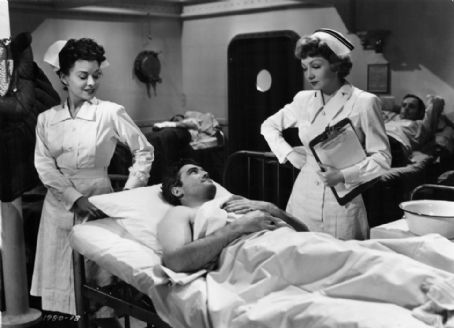 So Proudly We Hail! (1943). Directed and produced by Mark Sandrich. Cast: Claudette Colbert, Paulette Goddard who was nominated for an Academy Award for Best Supporting Actress for her performance and Veronica Lake. The script for this film was written by using the stories from journals, and diaries of the actual nurses who served at Corregidor. Some of the surviving nurses of Corregidor were also brought in during production as technical advisers to the film makers. A few of them were used as extras. Issues of Life magazine and photographers from Life magazine who were there, were brought in assure even more accuracy concerning uniforms and surroundings.

On 5 May 1942, an Army plane with the only eight surviving nurses from the hard-hit Army base in Corregidor, are headed back to the United States. A physician asks them to recount their tour of duty so that he can help bring their superior officer, Lieutenant Janet "Davey" Davidson, out of the emotional breakdown that has caused her silence.

Lieut. Sadie Schwartz goes back to the day in 1941 when the nurses under Davey's command met in San Francisco to board the Army transport ship that was to take them to Honolulu, Hawaii, for their two-year tour of duty:

Pearl Harbor, is bombed on 7 Dec 1941 in a surprise attack by the Japanese, the United States declares war and the nurses' ship is rerouted to meet with the Army ships in the Pacific Ocean. One of the convoy ships is torpedoed and the survivors are saved by the nurses's ship. Among the survivors is Olivia D'Arcy, a nurse who is so distant that she alienates the other nurses.

Olivia, soon has problems with her fun loving roommate, Joan O'Doul. Wanting to get to the bottom of the bickering Davey befriends Olivia and finds out that she watched her fiance die at Pearl Harbor.

After the nurses are stationed at an army hospital in the Bataan Peninsula, Olivia requests duty taking care of the wounded Japanese prisoners, intending to kill them, but.. finds herself unable to go through with her plans.

While the camp is being evacuated... Joan runs back to her tent to get her treasured black nightgown. The delay causes the death of their escorts and the nurses are forced to hide from the Japanese soldiers. Realizing there is no other way out, Olivia grabs a grenade and turns herself over to the enemy. She pulls the pin... saving the other nurses.

Their new base Hospital Kilometer, is a primitive camp in the jungle where the nurses care for over 8,000 wounded men. Malaria and dysentery, make life miserable through the camp, but the affected nurses continue to work. After, Ma's son dies from war wounds, Davey's commanding officer informs her that General Douglas MacArthur, has left the island and that the supply ship has been sunk.

After a moving to another base, a Japanese bomb kills nurse Rosemary Larson, while assisting surgeon Jose Bardia. Davey, burns her hands trying to saving them from the burning building. Bataan, is evacuated and the roads and waterways are filled with evacuees headed for Mariveles.

After, completing the surgery on John's wounded leg, Davey boards a rowboat hoping to escape to Corregidor. Finally reaching the underground base at Corregidor, the nurses continue to work under the constant stress of the air raids until their supplies run out.

John joins a group headed for Mindanao for supplies, he and Davey break military rules by getting married. They spend their wedding night next to a gun-mount by the bay and at five in the morning, John leaves on his mission.

Several days later, the nurses under Davey's command are the first to be secretly evacuated from Corregidor. Davey, resists going because she promised John, that she would be there to meet him when he returns, but a bombing attack forces her to leave and she goes into shock.

Now back to the present.. the doctor reads to Davey a letter from John, informing her that he is safe and that he continues to fight for the peace of all people. Along with the letter is a deed to his American farm, where he promises to meet her some day. Knowing that her husband is safe, Davey says his name.

In keeping with Army regulation, Veronica Lake (Lt. Olivia D'Arcy) changed her famous "peek-a-boo" hairstyle. She only let her hair down once, in her final scene. Later she cut it, with much publicity, because women who copied her and worked in factories kept getting their hair caught in the machinery.

"So Proudly We Hail!" was one of the first films that put women in the spotlight as honored war heroes. Amazing performances by: Claudette Colbert, George Reeves, you will be impressed by Veronica Lake and Paullette Goddard who was nominated for an Academy Award. 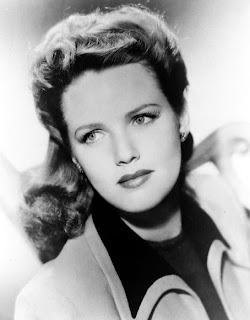 Barbara Britton (September 26, 1919 – January 17, 1980) is best known for her Western film roles opposite Randolph Scott, Joel McCrea, and Gene Autry, and for her two-year tenure as inquisitive amateur sleuth Pam North on the television series Mr. and Mrs. North.

While in school she began to show an interest in acting and began working on local stage productions.

In 1941, while appearing in a Pasadena Tournament of Roses Parade, a photo of Britton was used on the front page of a local newspaper. A talent scout took notice, and she was soon signed to a Paramount Pictures contract. That same year, she appeared in her first two films: the William Boyd western Secret of the Wasteland and Louisiana Purchase starring Bob Hope.


Her first major film appearance was in a small role in the John Wayne film Reap the Wild Wind (1942).

During the 1940's Britton starred in three films for which she is most recognized today, two of which co-starred Randolph Scott. The first was the 1945 film Captain Kidd with Scott, followed by The Virginian in 1946 opposite Joel McCrea. The third was the 1947 Randolph Scott film Gunfighters.

She teamed with Scott again in the 1948 western Albuquerque, and that same year she starred opposite Gene Autry in Loaded Pistols.

Reportedly because of lasting trauma suffered while making the 1943 war picture So Proudly We Hail!, she sought the help of physician and psychoanalyst Dr. Eugene J. Czukor in 1944. The film was about a group of nurses returning from the war in the Philippines who recall their experiences in combat and in love.

Britton and Dr. Czukor (22 years her senior) were married on April 2, 1945, and the marriage lasted until Britton's death 34 years later.

She was probably best known for being the spokesperson for Revlon products in the 1950's and 1960's, appearing in ads and commercials that included live spots on The $64,000 Question.

She also portrayed Laura Petri in Carl Reiner's Head of the Family, the 1959 pilot for the later Dick Van Dyke Show.

One of Britton's last roles was on the daytime TV soap opera One Life to Live in 1979. 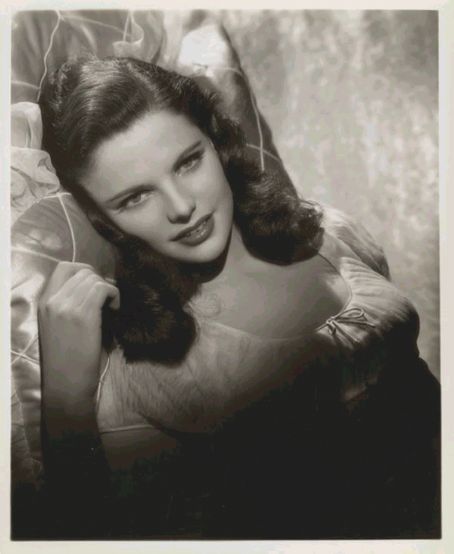