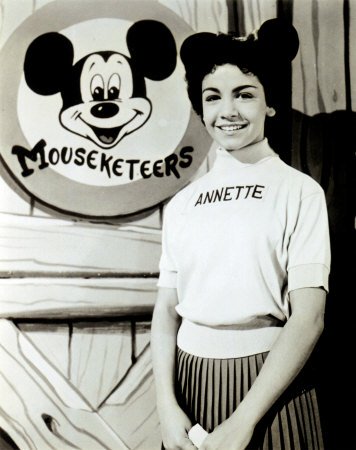 Annette Funicello, was one of the best-known members of the 1950's "Mickey Mouse Club" and a star of the 1960's "beach party" films, died Monday at a California hospital. Funicello, who was 70, "died peacefully from complications due to multiple sclerosis, a disease she battled for over 25 years.

Funicello, was 13 when she was selected by Walt Disney himself to be one of the original Mouseketeers of the "Mickey Mouse Club," the 1950's television show

Funicello had Top-40 hits including: "Tall Paul," "First Name Initial," "How Will I Know My Love," and "Pineapple Princess." Along with the singles, she recorded several successful albums, including "Hawaiiannette" (1960), "Italiannette" (1960) and "Dance Annette" (1961).

Funicello reunited with Avalon in 1987 to star in, "Back to the Beach," in which the two former teen idols played as parents of a pair of troublesome teenagers.

She will always be remembered as one of  Walt Disney's brightest stars...
Posted by Unknown at 4:34 PM

Email ThisBlogThis!Share to TwitterShare to FacebookShare to Pinterest
Labels: annette funicello, in memory(2013)