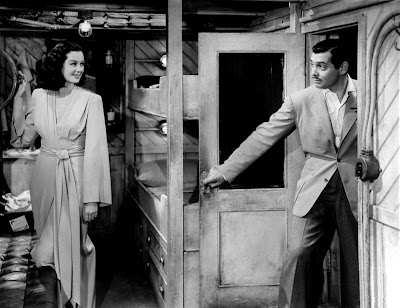 They Met in Bombay(1941). Drama/adventure/romance/war film. Directed by Clarence Brown. Cast: Clark Gable, Rosalind Russell and Peter Lorre. In the beginning, Lana Turner was announced as the female lead.

While the Duchess of Beltravers travels to Bombay, India.. jewel thief Gerald Meldrick has a perfect fake made of her treasured "Star of Asia" necklace. Gerald then goes to India, posing as a Lloyd's of London detective, who's there to protect his clients' jewelry.

Registering at the same hotel is Baroness von Duren, to whom Gerald notices right away. Unknown to Gerald, the baroness is actually Anya von Duren, a thief who also has plans to steal the necklace.. Gerald soon becomes suspicious of Anya, after she asks him how someone might steal the necklace.

That evening, Anya arranges to dine with to the duchess and pretending to be a friend of her relatives, Anya follows her to her suite. After the duchess falls asleep, Anya steals the necklace, after which Gerald sneaks into the duchess' room and switches the real necklace with the fake. 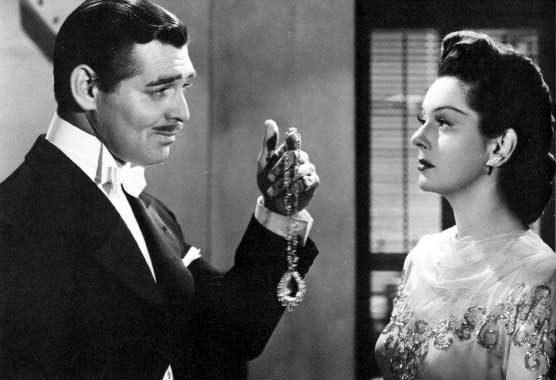 He then goes to Anya, takes the pendant from her and convinces her that he is letting her off with a warning. Anya's gratefulness soon ends when she discovers that he has switched the necklaces and the next day she confronts him.

Gerald, suggests that they become partners and they narrowly escape arrest when police Inspector Cressney discovers the theft. Forced to flee on a steamer, they have to deal with Captain Chang, who wants the reward for their capture.

Gerald and Anya,  jump ship after learning that Chang plans to turn them in. Now living in Hong Kong, Gerald and Anya are in love and living in poverty. Anya, wants to live a normal life, but.. Gerald, thinks otherwise.

One day, Gerald, who was once a British officer, poses as "Captain Huston" in a scheme to confiscate money from a Chinese merchant accused of stealing from the army. Gerald has some soldiers to help him and is so convincing that he is ordered to report to the Hong Kong Garrison for duty.

Because the Japanese army is advancing, all Europeans and friendly Chinese must leave Chang-lin, and Gerald is ordered to lead a regiment there. He cannot leave the barracks, but arranges for Anya to meet him at Chang-lin. She is there when he arrives and the evacuation is planned until Japanese troops refuse to allow anyone to leave.

Gerald, risks his own life destroying Japanese machine guns and is seriously wounded before the battle is over. When Gerald is released from the army hospital, he plans his and Anya's escape, unaware that he is to be awarded the Victoria Cross. Will he attend the award ceremony or leave before they are arrested?


What starts out as a fun jewel thieves adventure/romance film... turns into a wartime adventure. Which, kind of dragged on for me.. 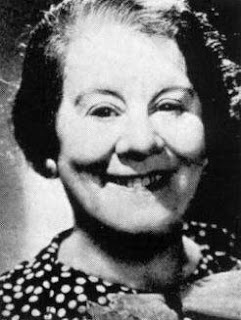 Her best known roles are as Greta Garbo's maid in Camille, and as W.C. Fields' mother-in-law in, The Bank Dick.