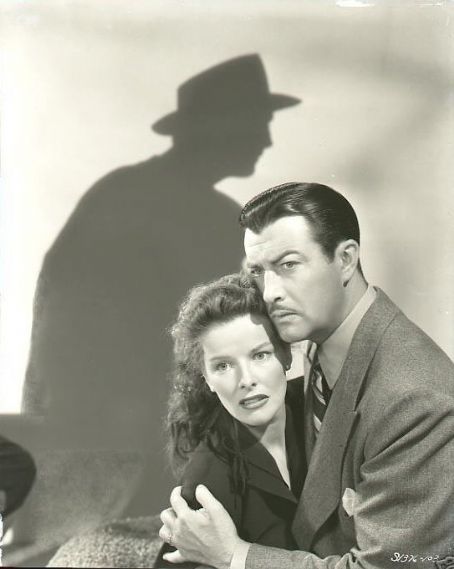 Undercurrent (1946). A film noir drama directed by Vincente Minnelli. The screenplay was written by Edward Chodorov, based on the novel You Were There by Thelma Strabel. Cast: Katharine Hepburn, Robert Taylor, Robert Mitchum.

In Vincente Minnelli's autobiography, he says that Robert Mitchum was very uncomfortable in the role of the sensitive Micheal.

This was Robert Taylor's first movie since returning from military service in World War II.

Katharine Hepburn and Robert Mitchum didn't get along. One day she told him, "You know you can't act, and if you hadn't been good looking you would never have got a picture at all. I'm tired of working with people like you who have nothing to offer."

The story begins when, Alan Garroway, meets Ann Hamilton, the unsophisticated daughter of chemistry professor Hamilton and it is love at first sight.

After Ann and Alan, are married they travel back to Washington, D.C., where she is introduced to Alan's manager Mr. Warmsley and his wealthy friends. Embarrassed of her appearance, Ann asks Alan to show her how to dress and behave.

Later, Alan tells Ann that after his father died he and his brother Michael took over their father's mechanical gadget business, and that he has not seen or heard from Michael since he was caught stealing from him.

While visiting Alan's Virginia family home, Ann is startled when a horse becomes extremely upset in the stable and learns from a frightened stable-hand that Alan once badly beat the horse.

After, Alan angrily orders Ann to stop playing a familiar tune on the piano, she thinks it is because of the bad memory's from his past. Later, George the caretaker, tells Ann that the song she was playing was one that Michael used to play. Ann decides to help her husband overcome his past.

After, Alan leaves on a business trip, Ann visits his office and asks Warmsley to give her directions to Michael's house near the ocean. At the house, Ann meets Michael... he introduces himself to her as the caretaker.

Later that night, Alan comes back and surprises Ann at the house. He demands to know why Ann is there, and Ann tells him that she wanted to find out more about his past.

Later, the two brothers are alone and Michael accuses Alan, of having killed an engineer at their plant, so he could steal his plans for a remote control explosive device. Michael tells Alan, that he has decided to expose him because.. he met Ann and believes that she should not be involved with a murderer. Then Alan informs Michael, that he has changed and that he plans to tell Ann the truth about his past. For now... Michael, decides to keep quiet about the murder. Alan, lied to his brother and plans to keep his past a secret.

Ann, tells Alan that she is obsessed with thoughts of Michael and that she wants to meet him, so that she can put him out of her mind, once and for all. Alan, accuses her of being in love with his brother. Alan, realizes that he must kill her to prevent her from leaving him. They are out riding on horseback when he decides to push her off a steep ledge, will she be able to get help in time?

Hepburn, gives a very convincing performance as the insecure Ann. Taylor's, performance as the tormented Alan is also perfect, always on the edge of losing control. Mitchum, plays a very different part for him. The ending maybe predictable... but exciting. 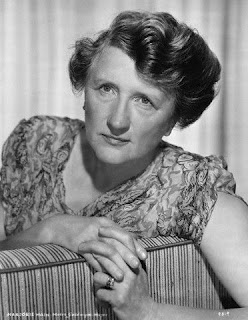 She worked in vaudeville on the Chautauqua and Orpheum Circuits, and debuted on Broadway in 1916. Her first film was, A House Divided(1931).

Main was typecast in domineering roles, for which her voice was perfect for. She repeated her stage role in, Dead End in the 1937 film version, and was cast many times as the mother of gangsters.

She again transferred a strong stage performance, as a dude ranch operator in, The Women(1939). Main was signed to a MGM contract in 1940, and stayed with the studio until the mid-1950s.

She played Sonora Cassidy, the chief cook, in The Harvey Girls (1945). The director, George Sidney, said that Miss Main was a "great lady" as well as a great actress who donated most of her paychecks to the support of a school.

Her most famous role was that of "Ma Kettle", which she first played in, The Egg and I(1947) opposite Percy Kilbride as "Pa Kettle". She was nominated for an Academy Award for Best Actress in a Supporting Role for the part and portrayed the character in nine more Ma and Pa Kettle films.

In the 1950s, she had appeared in the MGM musicals: Meet Me in St. Louis, The Belle of New York and It's a Big Country.

In 1954, Marjorie Main played her last roles for the studio; Mrs. Hittaway in, The Long, Long Trailer and Jane Dunstock in, Rose Marie.

In 1956, Main played The Widow Hudspeth in the hit film, Friendly Persuasian. In 1958, Main appeared twice as rugged frontierswoman Cassie Tanner in the episodes "The Cassie Tanner Story" and "The Sacramento Story" on NBC's western television series, Wagon Train. In 1964, she appeared on an episode of Perry Mason.

In 1974, a year before her death, Main attended the Los Angeles premiere of the MGM film, That's Entertainment. It was her first public appearance since she retired from films in 1958. At the post-premiere party, she was greeted with cheers from the crowd. 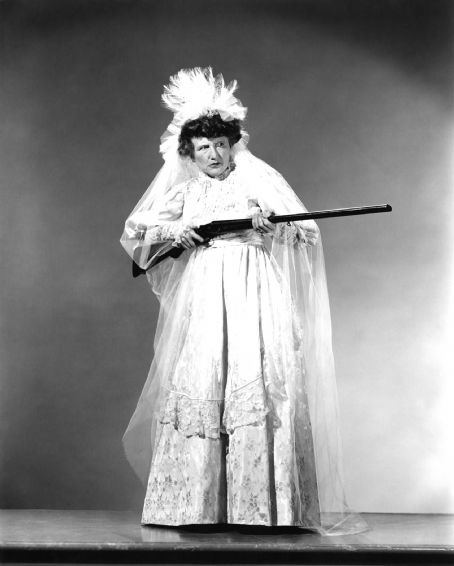