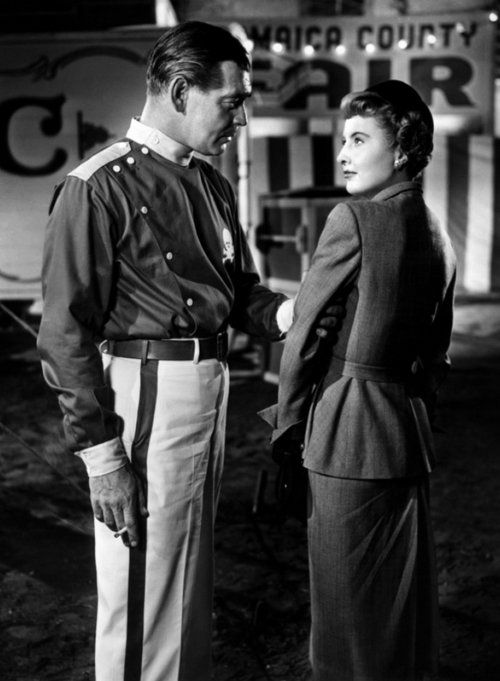 To Please A Lady (1950). A drama film produced and directed by Clarence Brown and starring Clark Gable and Barbara Stanwyck. The climactic race scene was shot at the Indianapolis Speedway, Indiana, USA.

Columnist Regina Forbes tries to interview race car driver Brannan, but he refuses. Regina then sees Brannan involved in a crash in which another driver is killed. Her story suggests that Brannan caused the accident deliberately, which causes him to be bared from racing. Brannan, begins driving in a stunt show and earns enough money to buy his own car and enter the big race. 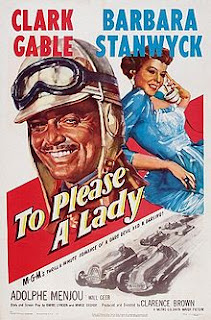 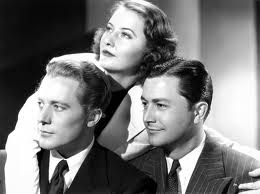 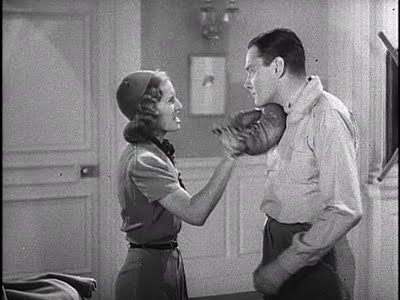 After drunken night playboy Jonathan Blair, wakes up to find that Valentine Ransome, who he really does not know, has spent the night in his mansion. Valentine, is in love with Jonathan and wants to change his wild ways and marry him. First she has to get past Jonathan's girlfriend, actress Carol Wallace.

Jonathan, is now worried about his families business which is in trouble. Valentine, jumps at the chance to buy up controlling interest in the company and moves into his home. When he learns that she is the new owner, he thinks that she only went out with him to get information about the company.

Jonathan, tells her that he will fight to get the company back, but later, to his valet, Butch , he admits he has hit rock-bottom. Butch, likes Valentine and wants things to work out for them .

Valentine, makes Jonathan vice president, but.. he visits the office only to tell her that he is going to marry Carol.

That afternoon at the wedding, Sam Ransome, bursts in and makes the claim that Carol is the mother of his children. The wedding is off, but one of the guests recognizes Sam and informs Jonathan that it is a lie.

The next day, Jonathan goes to the board with his new plan to get the company back on its feet. The board members accepts his plan and return control of the business to him. Valentine is happy ... until he tells her that the wedding with Carol is back on.

Butch, comes up with a forged marriage certificate showing that Valentine and Jonathan were married on that one drunken night. Will his plan work? 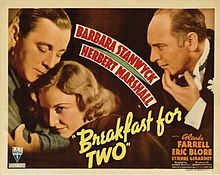 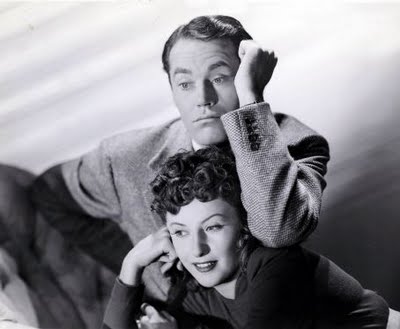 Melsa and her silly debutante friends hunt for a murderer while eating bonbons, flirting with Ames, and behaving badly. Ames, is also after the murderer, as well as Melsa's hand in marriage. This was the first of three screen pairings for Stanwyck and Fonda, the others being: The Lady Eve and You Belong to Me. 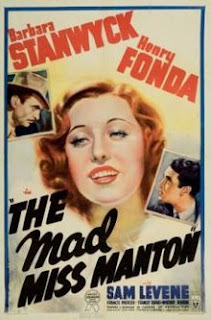 The Woman In Red(1935). Directed by Robert Florey and starring Barbara Stanwyck and Gene Raymond.

The story begin's when Shelby Barret, a stable hand who rides show horses for wealthy widow, Nicko, meets Johnny Wyatt, the son of a once-wealthy family who plays polo for Nicko. Gene Fairchild, a horseman who rides his own entries, is in love with Shelby, while Nicko is in love with Johnny.

Out of jealousy Nicko, fires Shelby, which causes Johnny to quit his job, so they can elope. Johnny brings Shelby to his family's home, but they do not approve of Shelby and give her the cold shoulder. Things become more complicated when the newlyweds start handling the horses of their neighbors.

Shelby, expecting a loan from her grandfather to start their own business, but is very disappointed when he does not come through. Where no where else to go Shelby borrows the money from Fairchild, without telling Johnny. Nicko, shows up starting gossip about Shelby, which make things even worse.

Later, Fairchild asks Shelby to help him entertain a wealthy client on his yacht and after she tries to contact Johnny, with no luck she accepts the job. The client and his date chorus girl Olga, show up drunk. Olga accidentally falls overboard and drowns.  When Fairchild, is accused of her murder, he tries to keep Shelby's name out of the case even though it looks bad for him.

In court... one of the ship's officers says that he saw Fairchild leaving the ship with a mysterious "woman in red,". Shelby, can't take it anymore.. confesses that she is the "woman in red", knowing that she is risking her marriage. Will Johnny understand and forgive her? 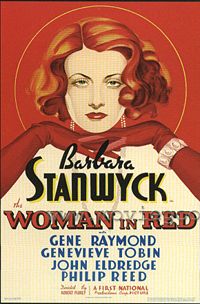 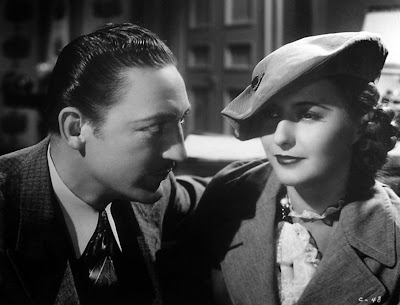 When the governor is charged of taking a bribe, Sheldon is put in charge of the investigation. Ruth, thinks it best to keep their marriage a secret, so no one will think he is a prejudiced investigator.

Everyone believes that the money was a reward for Vincent's pardon of Holdstock, who commits suicide before he can confirm or deny this. Everything seems to point to Vincent's guilt, but Ruth continues to believe her father is innocence.

Alone, one night in the apartment, Ruth witnesses Bredeen's murder. She saw that Hazel Normandie, Sherman's secretary, did not do the shooting, but.. she refuses to testify because she would have to reveal her marriage.

Determined to clear her father, Ruth tracks down Martin. He admits that Holdstock was murdered, but he escapes before she can stop him. Will Ruth testify in court to save Hazel from murder charges? 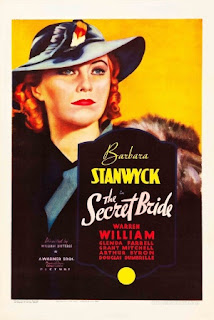 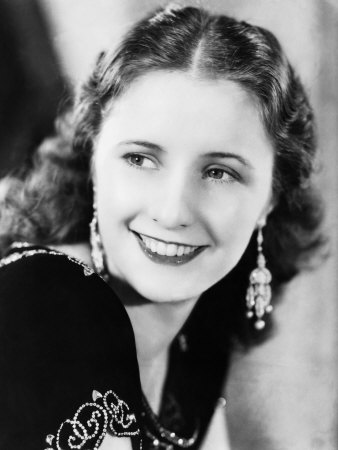 Ever In My Heart (1933). A drama film starring Barbara Stanwyck and Otto Kruger.

Mary Archer, is engaged to her cousin Jeff, but when he comes home from studying in Europe, he brings his German friend, Hugo Wilbrandt, who she falls in love with. Despite her family's objection, the two are married and Hugo lands a teaching job at the college.

They soon welcome a birth of a baby boy, after which, Hugo proudly becomes a United States citizen. After, the war breaks out, Hugo is fired from his job because of his anti-German sentiment.

After their son dies, some neighborhood kids stone their dog nearly to death, Hugo, taking pity on his beloved pet, puts the dog out of his misery. Mary's grandmother offers Hugo a job in the family mill if he will change his German name, being proud man, he refuses.

After Mary becomes ill, Hugo sends her to live with her family and leaves for Germany. Later, Mary receives a letter in which Hugo writes, "They let me be a citizen, but they won't let me be an American," and tells her that he is going to fight for his people.

Mary divorces Hugo to marry Jeff, who joins the army and is sent to France. Mary follows him and goes to work in a canteen. There, she sees Hugo dressed as an American soldier and learns from Jeff that a German spy is in the area.

Later that night, Hugo meets Mary in her room and she realizes that she is still  loves him. Certain that he is the spy, she must choose between her own feelings and her duty to her country. 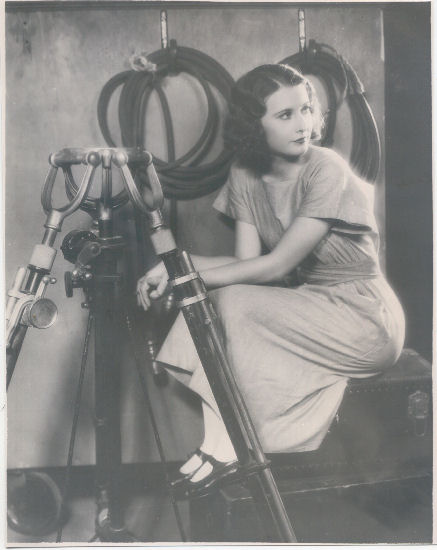 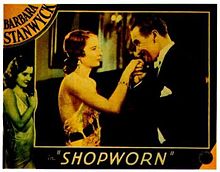 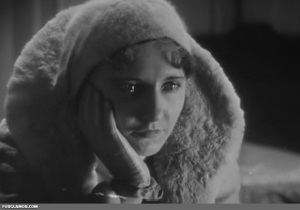 Illicit (1931). Even though, the wealthy Dick wants to marry Anne, she's afraid to marry because she does not want to lose the romance in their relationship. They soon learn from Georgie Evans and from Dick's father that they have become the subject of scandal, so they decide to marry.

After a year of marriage, Dick starts seeing, Margie True, who has always been in love with him. Anne learns about his affair when she goes to a nightclub with friends Georgie and Helen Dukie Childes and sees Dick with Margie.

She leaves him and takes her own apartment. Dick and Anne continue to see each other, but when he finds an old boyfriend Price at Anne's apartment, he begs her to come home with him. When Anne refuses, Dick makes plans to go abroad with Margie. But.. can he go through with it. 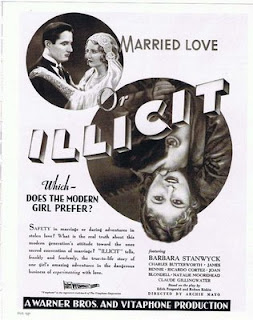 Email ThisBlogThis!Share to TwitterShare to FacebookShare to Pinterest
Labels: barbara stanwyck, shopworn(1932), the bride walks out(1936), the mad miss manton (1938)