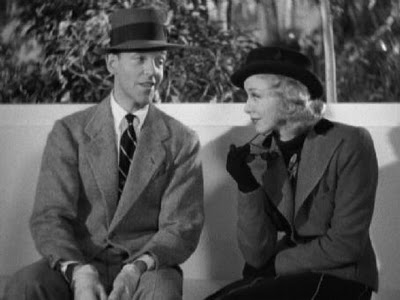 Shall We Dance(1937). The story is about a ballet dancer Petrov, who follows Linda Keene, across the ocean with many hilarious misunderstandings that keep the story going. A very entertaining musical with the songs: "Slap That Bass" number aboard ship, "They Can't Take That Away From Me", "They All Laughed at Christopher Columbus" and "Let's Call The Whole Thing Off." Fans of the two dancing stars will love it.

Please click here to view Shall We Dance(1937)movie review. 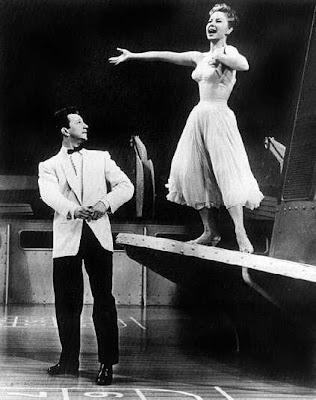 Anything Goes(1956). After a long running show, dancer Bill Benson, is convinced by his producer, Victor Lawrence, to team up with Ted Adams. Now, all the new partnership needs is a talented female lead. While in London, Bill watches Patsy Blair, performing in a musical and offers her the lead.

Patsy, feels that she can not take the part because her father, is wanted back in the States on tax evasion charges. Her father, lies to her saying that he no longer owes money to the Treasury Department. While in Paris, Ted has signed nightclub singer Gaby Duval, for the same role.

Each, brings their leading ladies aboard a cruise ship. Now, their problem is to decide which one will be chosen for the role. Things become complicated when the guys fall in love with each other's girl. The musical numbers are very entertaining making it a worth while film to watch. 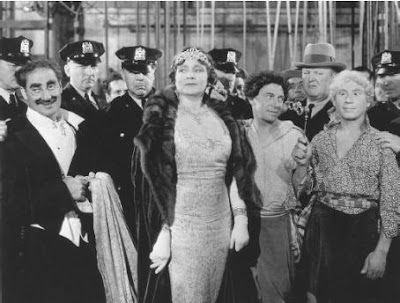 A Night At The Opera (1935). While vacationing in Milan, wealthy Mrs. Claypool hires Otis B. Driftwood to take her to all the hot spots. While out on the town she meets opera impresario Herman Gottlieb, who wants her to hire tenor Rudolfo Lassparri for his New York opera company.

Lassparri, a man who only thinks of himself and tries to sweep Rosa off her feet, but she is in love chorus singer, Ricardo Barone. Rosa, receives an offer to go to America and does not want to leave Ricardo, until she learns that he is a stow away and is working for Driftwood.

When they dock in New York, the stowaways hide in Driftwood's hotel to avoid deportation. When Rosa and Lassparri, are getting ready to perform, Trovatore Lassparri, being stubborn refuses to sing with her. Tomasso takes over for the conductor and performs the music for, "Take Me Out to the Ball Game" while Driftwood is out selling peanuts to the crowd. When Detective Henderson arrives with the police, the stage is a shambles and Ricardo performs with Rosa.

It has comedy, music and a good cast, it maybe one of the two best Marx Brothers films, the other being "Duck Soup". 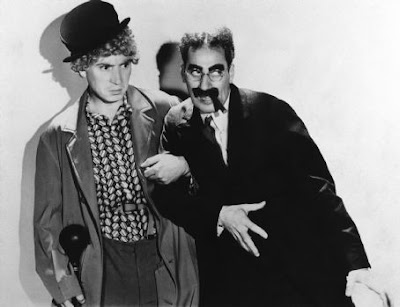 Monkey Business (1931). Four stowaways, Groucho, Harpo, Chico and Zeppo, are discovered aboard a luxury liner and are chased by Captain Corcoran and his crew. Harpo, becomes part of a Punch and Judy show and Chico and Harpo impersonate the barber. Groucho hides in gangster Alky Briggs's stateroom, where he finds Lucille, Briggs's wife, alone. Briggs, walks in and hires Groucho and Zeppo as his bodyguards. Chico and Harpo, walk into gang leader Joe Helton's room, to play a game of chess. Briggs enters Helton's room and announces his takeover of Helton's territory, but Helton has different ideas. When the ocean liner docks, the stowaways try to impersonate singer Maurice Chevalier. When a man faints, the stowaways hide in his stretcher and are carried off the ship. Later. Mary Helton is kidnapped by Briggs's men and held in the barn. Because Briggs has told Groucho of his plan, Groucho and the boys go to the barn to rescue Mary.

The funniest Marx Brothers scene, is where all four of the brothers take turns impersonating Maurice Chevalier. 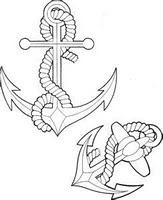 Email ThisBlogThis!Share to TwitterShare to FacebookShare to Pinterest
Labels: a night at the opera(1935), all aboard, anything goes(1956), monkey business(1931), shall we dance(1937)