A Christmas story that you will not soon forget: All Mine to Give(1957). 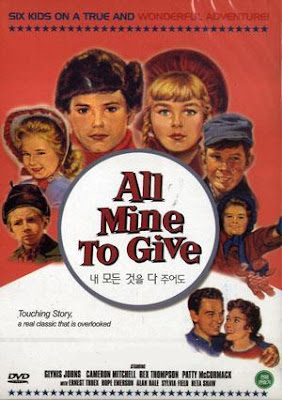 All Mine to Give(1957). Drama starring: Glynis Johns, Cameron Mitchell, and Rex Thompson. This story is based on a true-life story set in Wisconsin.

The film is told in flashback, while pulling one of his sisters in a sled through the snow on Christmas Eve, young Robbie thinks about how his family was before their lives began to fall apart:

Just off the ship from Scotland, Robert and his pregnant wife Mamie come to America to begin their new lives.. They are very disappointed to find that Mamie's uncle, had died in a fire three weeks before. The couple can not believe when their neighbors help them to rebuild the cabin.

After Robbie is born, Rob, walks to a logging camp twenty-five miles from home looking for work. Tom Cullen, hires Rob as a cutter, but when Cullen calls him a "Nordsky," Rob, informs him that he is Scottish. Cullen, rarely allows him to go home to see his family. Rob, at the end of his rope challenges his boss to a fight. When Rob wins the fight Cullen, begins calling him "Scotty" and they become good friends.

Rob, wanting to spend more time with his family returns to building his boats after the birth of his son, Jimmie. During the next few blissful years, Mamie and Rob have four more children: Kirk, Annabelle, Elizabeth and Jane.

One day, Kirk, becomes ill with diphtheria and Dr. Delbert, quarantines the house. The rest of the family stay in an abandoned cabin in the woods, while Mamie nurses Kirk back to health. After a couple of weeks, Rob and the very dirty children happily return home, Rob begins coughing.(You will want to keep the Kleenex box in your lap for the rest of the film.)

Mamie, takes care of Rob until his death and then takes in sewing to support her children. Around Christmas Mamie, comes down with typhoid fever. Mamie calls Robbie, to her bedside and asks him to find good homes for the children, after she dies.

During Mamie's funeral, Mrs. Runyon cruelly asks what they are to do with six orphans. Robbie, asks that they be allowed to spend their last Christmas together and Dr. Delbert agrees. After, his brothers and sisters have fallen asleep, Robbie and Jimmie decide which families the children would be happy living with. On Christmas Day, Robbie visits each of the families hoping that they have the Christmas spirit in their hearts to take them in:

Annabelle, is given to the Tylers, as they are just sitting down to Christmas dinner. The family Robbie has chosen for Lizzie is away for the holidays, so he asks childless couple who teach at the school to take her.

When they arrive back at the cabin, Mrs. Runyon, is trying to leave with baby Jane. The brothers bar the door, but Mrs. Runyon promises to return later for Jane.

Realizing, he has run out of time to send Kirk to the family he had selected for him, Robbie gruffly sends his tearful brother to another family. This all takes its toll on Robbie and he collapses, by a tree that they all craved their names on. He soon gets it together and says goodbye to Jimmie. As Jimmie knocks on the door of Mrs. Raiden, whose daughters were always calling him "cute," Robbie loads Jane into a small sled and pulls her ten miles, until he finds a cosy looking home with a kindly woman, who agrees to take them both in. Robbie is tempted for a minute and then continues through the snow back to Cullen's logging camp.

A wonderfully heart-warming movie about a large family, who's troubles lead to an extremely heart-breaking conclusion, that you will never forget. All the children give wonderfully, believable performances 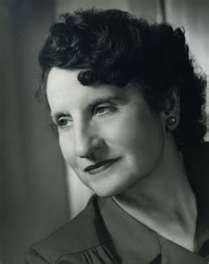 Standing 6 ft 2 in, Emerson's most memorable performances were a circus strong woman in the film, Adam's Rib who lifts Spencer Tracy up in the air (1949), in the film noir, Cry of the City (1948) and as a mail-order bride in, Westward the Women (1952). Her most famous role, was as prison matron Evelyn Harper in the film, Caged (1950) which landed her an Academy Award nomination for Best Supporting Actress.

Email ThisBlogThis!Share to TwitterShare to FacebookShare to Pinterest
Labels: all mine to give(1957), christmas