Cheetah, a chimpanzee who performed in the "Tarzan" films of the 1930s, has died at the age of 80. 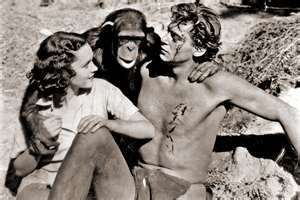 Cheetah-Mike, a chimpanzee said to have performed in the "Tarzan" films of the 1930s, has died at the age of 80, of kidney failure on December 24, 2011. according to the Florida sanctuary where he lived. The average life span of a wild chimpanzee is around 45 years.

Cheetah was said to have performed in "Tarzan the Ape Man" (1932) and "Tarzan and His Mate" (1934), classic films about a boy raised in the jungle starring Johnny Weissmuller and Maureen O'Sullivan.

The Florida chimpanzee who arrived at the sanctuary in 1960 loved finger painting and watching football.

Video Is from: Tarzan the Ape Man (1932). It was in this film that Cheetah the chimpanzee made his debut.

Email ThisBlogThis!Share to TwitterShare to FacebookShare to Pinterest
Labels: cheetah