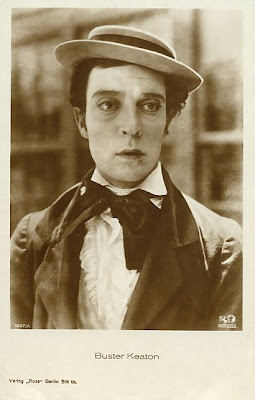 Buster Keaton (October 4, 1895 – February 1, 1966). Was an comic actor, filmmaker, producer and writer. He was best known for his silent films, in which his trademark was a stoic expression, earning him the nickname "The Great Stone Face".

Keaton was born Joseph Frank Keaton into a vaudeville family. He was named "Joseph" to continue the tradition on his father's side. Joe Keaton owned a traveling show with Harry Houdini, the Mohawk Indian Medicine Company.

The story goes... Keaton, was nickname "Buster" at about eighteen months of age, when Harry Houdini, happened to see the young Keaton fall down a flight of stairs without getting hurt. Houdini said, "That was a real buster!". After that Keaton's father started to call him "Buster". 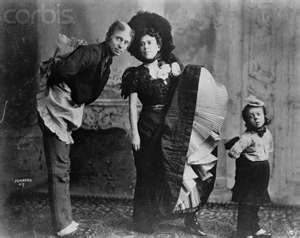 At the age of three, Keaton began performing with his parents in The Three Keatons. Myra played the saxophone, while the young Keaton would goad his father and the father would throw him against the scenery, into the orchestra pit, or even into the audience. Which lead to accusations of child abuse, and arrest. However, Buster Keaton was always able to show the authorities that he had no bruises or broken bones. In 1914, Keaton told the Detroit News:

The secret is in landing limp and breaking the fall with a foot or a hand. It's a knack. I started so young that landing right is second nature with me. Several times I'd have been killed if I hadn't been able to land like a cat. Imitators of our act don't last long, because they can't stand the treatment.

According to one biographer, Keaton was made to go to school while performing in New York, but only attended for part of one day.  Keaton, later said that his mother taught him to read and write. By the time he was 21, his father's alcoholism threatened the the family act, so Keaton and his mother, left for New York, where Buster Keaton's career moved into film.

Although he did not see active combat, he served in World War I, during which time he suffered an ear infection that permanently damaged his hearing.