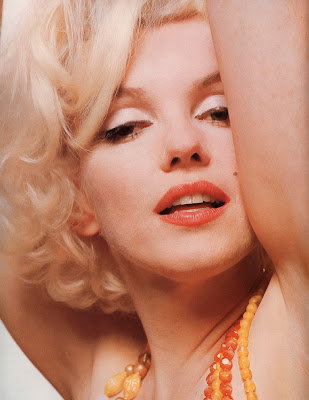 Over the years, Hollywood has tried to find another Marilyn Monroe. She is one of the greatest sex symbols of all time, and she still sets the standard for glamour, sexuality and beauty. Even today, nearly half a century after Monroe’s 1962 death, we still can’t stop trying to fill her shoes. Madonna, Lindsay Lohan, Scarlett Johansson, Ashley Judd, Mira Sorvino and now with a Marilyn inspired movie out Nov. 4, Michelle Williams, can be added to the list.

Many beautiful blonde actress of her era found themselves being compared to Marilyn Monroe. The Actresses, listed below are the more well known Marilyn Monroe "clones":


She first came to the attention of Hollywood producers with her performances in, Death Valley Days (1955–1956). She landed a long-term contract with Metro Goldwyn Mayer. Lang played the feminine lead in, House of Numbers (1957). The movie was the first to be filmed inside, San Quentin Prison.

Lang, starred with Elvis Presley in, Jailhouse Rock. Later she performed in the film, Party Girl (1958), where she played, "Ginger D'Amour", a Chicago showgirl.


Lansing's, film career began in 1948 and in 1952, she played an uncredited role in, Singin' in the Rain. She received top billing in, Hot Cars (1956). In the opening scene in the film, Touch of Evil (1958), she plays the dancer who is killed. Lansing, had a small role as an astronaut's girlfriend in the sci-fi, Queen of Outer Space(1958). During the 1950s, she starred in short musical films for the Scopitone video-jukebox system. Her songs included: "The Web of Love" and "The Silencers".

Lansing played "Lola" in, Marriage on the Rocks (1965), with a cast that included Frank Sinatra, Deborah Kerr, and Dean Martin. She had also performed in, Sinatra's film, A Hole in the Head and in Martin's film, Who Was That Lady? Her last film performance was in, Bigfoot (1970).


According to many film buffs, her best work as an actress was when she played a murderess in the film, Yield to the Night(1956). She was willing to play repulsive characters in films such as, The Amazing Mr. Blunden, The Unholy Wife, and Timon of Athens.


Joan, was discovered by producer Howard Hughes, on the night she was crowned Miss Palm Springs. They dated for several years. Hughes launched her career by placing her in several RKO films.

Hughes, gave Van Doren a bit part in, Jet Pilot, which was her motion picture debut. Her line consisted of one word, "Look!" and she appears uncredited in the film.

On January 20, 1953, Van Doren signed a contract with Universal Studios. Van Doren's first movie role for Universal was in the film, Forbidden (1953), playing a bit part as a singer. She then made, The All American (1953), playing her first starring role as Susie Ward, a wayward girl who is the man-trap at a campus beer joint. In Yankee Pasha (1954), she played a slave girl, Lilith. In 1955, Van Doren was cast in, Ain't Misbehavin', a musical comedy and starred in the crime-drama film, Running Wild.

In 1956, she played opposite a young "unknown" at the time Clint Eastwood in, Star in the Dust. Van Doren, performs in a small role as a daughter of a ranch owner. Star in the Dust was Van Doren's last film with Universal, for she was tired of being cast in small non-"breakthrough" roles and she stopped accepting film offers from Universal, and started working more successfully with other studios.

Van Doren, went on to star in several bad girl movies that later became cult films: Untamed Youth in 1957, she was the first woman to sing rock and roll in a Hollywood musical (Eddie Cochran did the music for the film). This film was later featured in, Mystery Science Theater 3000's "Untamed Youth" (1990).


North, made her film debut as one of the many club members in, Excuse My Dust(1951). She was spotted by a choreographer performing at the Macayo Club in Santa Monica, and was cast as a chorus girl in the film, Here Come the Girls(1953). She made her Broadway debut in the musical Hazel Flagg, for which she won a Theatre World Award. She reprised her role in the film version, Living It Up (1954).

North, landed the lead role opposite Betty Grable in, How to Be Very, Very Popular (1955), a role that was rejected by Monroe. Film historians, say North's dancing to, "Shake, Rattle and Roll", is the film's most memorable scene.

Later that same year, believing North was now a box-office draw, Fox cast her in a supporting role opposite Gordon MacRae, Dan Dailey, and Ernest Borgnine in the film, The Best Things in Life Are Free, The film was a success, but the studio began to lose interest in North and started to promote, Jayne Mansfield.

North's next film role wouldn't come until she landed a role in, Destination Inner Space (1966). This low-budgeted science-fiction film was a box-office failure. Over the next few years North performed in the movies: The Trouble with Girls (1969) with, Elvis Presley, Charley Varrick (1973), and as John Wayne's long-lost love in the actor's final film, The Shootist (1976). She had supporting roles in two Charles Bronson movies, Breakout(1975) and Telefon(1977).

In the 1990s, she appeared as Kramer's mother, Babs Kramer, in two episodes of the TV series Seinfeld. North's last onscreen role came in the film, Susan's Plan(1998).

Blonde actresses, were considered attractive and desirable and relied on her looks rather than on intelligence.


This way of thinking may have started with the, French courtesan named Rosalie Duthe, who performed in a 1775 play Les curiosites de la Foire, she had the habit of pausing a long time before speaking, appearing not only stupid but mute.


The film, Gentlemen Prefer Blondes, is the perfect example of the appeal of blondes. The film starred Marilyn Monroe as the blonde and Jane Russell as her wise brunette friend. Marilyn Monroe, does show a certain amount of wit and expresses her attitude in her song, "Diamonds are a girl's best friend".

And when her fiance's father asked her why she pretends to be dumb, she answers, "men prefer it this way".


Another perfect example is Goldie Hawn, who is best known(early years) as the giggling "dumb blonde", stumbling over her lines, especially when she introduced Rowan and Martin's Laugh-In "News of the Future".

﻿
﻿ Even the director Hitchcock, had preference for blonde actress whose sex appeal was "indirect", he felt sex should not be advertised. In Vertigo James Stewart forces a woman to dye her hair blonde. One of Hitchcock's earliest films, The Lodger (1927), features a serial killer who stalks blonde women. Blonde actress Anny Ondra starred in Hitchcock's first sound film, Blackmail (1929).


Hitchcock said he used blonde actresses in his films, because of a tradition that began with silent star Mary Pickford. The director said that blondes were "a symbol of the heroine". He also thought they photographed better in black and white.

In Family Plot, Karen Black plays a kidnapper who wears a blonde wig and sunglasses as a disguise. Other well known blondes include: Tippi Hendren in The Birds, Dany Robin in Topaz, Barbara Leigh-Hunt in Frenzy, Janet Leigh in Psycho, and Grace Kelly in Rear Window.

There were many more beautiful blonde actresses (listed below) who may have changed the "blonde stereotype" and created a more sophisticated blonde for movie goers...


Holliday began her career as part of a night-club act, before working in Broadway plays and musicals. Her success in the 1946 stage production of Born Yesterday as "Billie Dawn" led to her being cast in the 1950 film version, for which she won the Academy Award for Best Actress and the Golden Globe Award for Best Actress - Motion Picture Musical or Comedy. She was best known for her performance on Broadway in the musical Bells Are Ringing, winning a Tony Award for Best Performance by a Leading Actress in a Musical and reprising her role in the 1960 film.

In 1954, she starred with then-newcomer Jack Lemmon in his first two films: It Should Happen to You and Phffft! She was able to change her mood quickly from comic to serious is one, that would touch your heart."


Harlow starred in many films, designed to showcase her magnetic sex appeal and strong screen presence, before making the transition to more developed roles and achieving massive fame under contract to Metro-Goldwyn-Mayer. Harlow's, enormous popularity and "laughing vamp" image were in distinct contrast to her personal life, which was full of disappointment and tragedy.

Known for her bawdy double entendres and was one of the more controversial movie stars of her day. West, encountered many problems with censorship.


She is best known for her comedic roles in the screwball comedies of the 1930s. She was the highest-paid star in Hollywood in the late 1930s, earning per year more than five times the salary of the US President.

Graham Greene, praised her for her faster-than-thought delivery. A Platinum blonde, with a heart-shaped face, delicate, impish features that performed expressively through her well known classics, Twentieth Century and My Man Godfrey."


In October 1953, with the film, Mogambo, she became a movie star, a status confirmed in 1954 with a Golden Globe Award and Academy Award nomination as well as leading roles in five films: The Country Girl, in which she gave a deglamorized, Academy Award-winning performance. She retired from acting at 26 for her duties as Princess Grace of Monaco.


Her famous bathing suit photo made her the number-one pin-up girl of the World War II era. Grable, was known for having the most beautiful legs in Hollywood. Grable's legs were insured by her studio for $1,000,000 with Lloyds of London.

She was known for the "girl-next-door" image and was capable of performing in comedy, romance and heavy drama, she performed in 39 films, released 29 albums. She received an Academy Award nomination for her performance in Pillow Talk, won a Golden Globe, Grammy Lifetime Achievement Award, Presidential Medal of Freedom, Legend Award from the Society of Singers, and, in 1989, received the Cecil B. DeMille Award for lifetime achievement in motion pictures.


She came well known for her performance in the film, Picnic(1955) and went on to perform in, The Man with the Golden Arm, Pal Joey, Bell, Book and Candle, Strangers When We Meet, The Notorious Landlady, Kiss Me, Stupid, and The Amorous Adventures of Moll Flanders. However, she may be best known for her performance in the film, Vertigo(1958). Novak retired from acting in 1991.

Flickchick is also celebrating "Blonde Bomshells", this month. Please click here to read her article.
Posted by Dawn at 3:46 PM