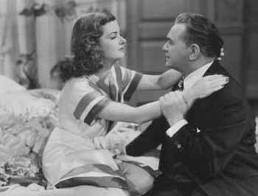 This weeks (Updated June 14th ). Chick Flicks at the Movies: Scarlet Street (1945). Cast: Edward G. Robinson, Joan Bennett,(pictured above) and Dan Duryea, had earlier appeared together in The Woman in the Window (1944) also directed by Fritz Lang. The three were re-teamed for Scarlet Street. Please click picture on sidebar to view movie.

Happy Birthday: Bob Fosse! (June 23, 1927 – September 23, 1987), was an actor, dancer, musical theater choreographer, director, screenwriter, film editor and film director. He won an unprecedented eight Tony Awards for choreography, as well as one for direction. He was nominated for an Academy Award four times, winning for his direction of Cabaret (beating Francis Ford Coppola for The Godfather). He was closely identified with his third wife, Broadway dancing star Gwen Verdon. She was both the dancer/collaborator/muse upon whom he choreographed much of his work and, together with dancer/choreographer Ann Reinking, a significant guardian of the Fosse legacy after his death.

ON TCM June 24th: Today We Live (1933). Cast: Joan Crawford, Gary Cooper, Robert Young, and Franchot Tone. The film is based on "Turnabout" by William Faulkner. Faulkner also provided the dialogue for the film, making it the only film version of his work that Faulkner co-wrote. Joan Crawford's character was added to the film to include a love interest. She met her future husband Franchot Tone on the set of the film. They married two years later.

ON TCM June 25th: Jane Greer. Best known for her role as femme fatale Kathie Moffat in the 1947 film noir, Out of the Past.

I have not yet seen this film. Tom's excellent review, makes it sound like a must see film for the classic movie fan.