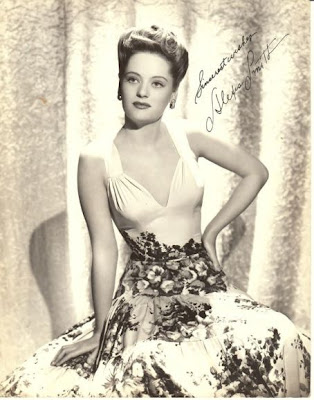 This weeks (Updated May, 29 ). Chick Flicks at the Movies: Inner Sanctum (1948). An atmospheric little noir starring Charles Russell and Mary Beth Hughes. Fritz Leiber, Sr. (father of the famous author) has a cameo as a seer or psychic. . Please click picture on sid bar to view movie.

Happy Birthday: Dean Martin! (June 7, 1917 – December 25, 1995), singer, film actor, television star and comedian. Martin's hit singles included "Memories Are Made of This", " That's Amore", "Everybody Loves Somebody", " Mambo Italiano", "Sway ", "Volare" and smash hit "Ain't That a Kick in the Head?". Nicknamed the "King of Cool", he was one of the members of the "Rat Pack" and a major star in four areas of show business: concert stage/night clubs, recordings, motion pictures, and television.

ON TCM: June 8th. The Smiling Ghost (1941). Directed by Lewis Seiler. Starring Brenda Marshall, Alexis Smith, Wayne Morris. An heiress seems to be cursed as each of her intended grooms meets with a horrible end.

ON TCM June 8th: The Two Mrs. Carrolls (1947). The Two Mrs. Carrolls is a 1947 film noir made by Warner Brothers. It was directed by Peter Godfrey and produced by Mark Hellinger, with Jack L. Warner as executive producer, from a screenplay by Thomas Job based on the play by Martin Vale. It starred Humphrey Bogart, Barbara Stanwyck and Alexis Smith with Nigel Bruce.

ON TCM June 8th: Conflict (1945). Directed by Curtis Bernhardt, produced by William Jacobs with Jack L. Warner as executive producer from a screenplay by Arthur T. Horman and Dwight Taylor, based on the story The Pentacle by Alfred Neumann and Robert Siodmak. It starred Humphrey Bogart, Alexis Smith and Sydney Greenstreet. The film is the only one which Bogart and Greenstreet co-starred and Bogart, not Greenstreet, was the villain or corrupt character. Please click picture  on side bar to read review.

Happy Birthday: Judy Garland! (June 10, 1922 – June 22, 1969) was an American actress and singer. Through a career that spanned 45 of her 47 years, Garland attained international stardom as an actress in musical and dramatic roles, as a recording artist and on the concert stage. Respected for her versatility, she received a juvenile Academy Award, won a Golden Globe Award, as well as Grammy Awards and a Special Tony Award. She was nominated for the Academy Award for Best Actress for her role in A Star is Born and for Best Supporting Actress for her performance in the 1961 film, Judgement at Nuremberg.

Happy Birthday: June Haver! (June 10, 1926 – July 4, 2005), was an American film actress. She is most well-known as a popular star of 20th Century-Fox musicals in the late 1940s, most notably The Dolly Sisters, with Betty Grable. She is also often linked to her second husband, actor Fred MacMurray.

ON TCM June 13th: The Last Mrs. Cheyney (1929). The Last of Mrs. Cheyney is a 1929 American comedy film directed by Sidney Franklin. The screenplay by Hanns Kräly is based on the 1925 play of the same name by Frederick Lonsdale. The film was remade twice, with the same title in 1937 and as The Law and the Lady in 1951.

"Article of the Week" : The Movie Projector Blogspot. Films of Tracy and Katharine Part one of 4.

Fun Facts from:
IMDb
TCM
Posted by Dawn at 9:44 AM