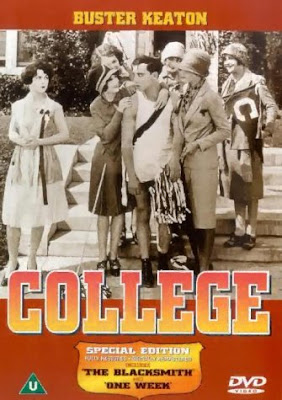 “College” (1927) is a silent comedy starring Buster Keaton, Anne Cornwall, and Flora Bramley. Directed by James W. Horne, this film stars Keaton in one of his most memorable roles as the hapless Ronald who gives a high school valedictory address that praises books and condemns sports. His girlfriend Mary thinks that’s nonsense. Afraid he might lose her, Ronald goes to college and tries to become a star athlete.

“College” is my favorite of Keaton’s silent comedies because the majority of the film’s gags concern Buster’s attempts to become a successful athlete in order to win back his girlfriend. It’s interesting to note that in 1927, before he began making films, Spanish director Luis Bunuel praised Keaton’s achievement in “College” for its simple cinematic style, and at least one segment in his classic surrealist film, Un Chien andalou (1929) may have been influenced by Keaton. 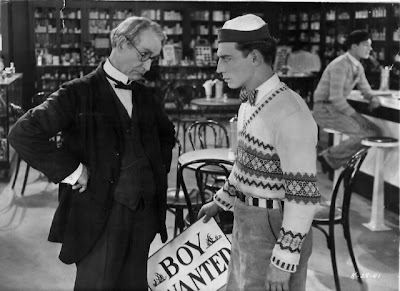 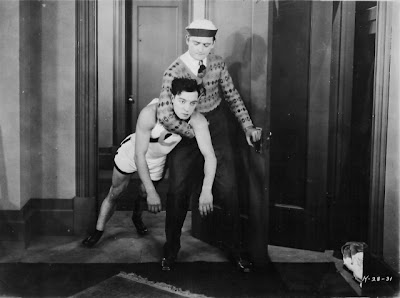 Buster Keaton, The Great Stone Face, was a filmmaker and comedian. He wrote, produced, directed and acted in ten feature length comedies within five years in the 1920’s. He was also in 124 other films, short and long, over a 50 year period right up to his death in 1966. He and his parents and two younger children were a close and happy family for his first twenty years. His father had met his mother while playing in her father’s medicine show, and Buster was born on tour, in Piqua, Kansas. His very earliest stunt was observed by the famous magician, Harry Houdini, a member of their vaudeville company. When six-month-old Joseph rolled down a flight of stairs at a theatrical boarding house and came up laughing, Houdini and Joseph, Sr. nicknamed him Buster. There were many happy tours and pleasant family summers, but eventually alcoholism caught up with Joseph Keaton, Sr. Mrs. Keaton broke up the act in 1917, and Buster got a job on his own with a new musical review on Broadway for $250 a week. Before Buster could start, he visited the set of a Roscoe Arbuckle film production on East 48th Street. Buster was invited to do a bit part in the two-reeler starting that day, “The Butcher Boy” (1917). Buster turned down the $250 for a chance to work in a medium for $40 a week to start. Buster worked with Arbuckle from 1917 to 1919. Joseph Schenck, who had been handling the finances for the Arbuckle films, decided to let young Buster Keaton produce a series of his own pictures. Schenck left Buster free to work as he pleased, but he kept ownership of the films. Keaton had trusted his brother-in-law, Schenck, to take care of his business affairs, but in 1928, Schenck advised him to give up his independence and go to work at MGM. This took away Keaton’s creative freedom and after two more pictures he began to suffer personally and professionally. Keaton did stay busy, but the declining years were bitter and degrading. His marriage in 1921 to Natalie Talmadge, whose sister Norma had married Schenck, started well and it lasted ten years, but Keaton was appalled at his wife’s financial demands. The divorce took much of Keaton’s property and income and separated him from his two sons. Keaton developed a problem with alcohol, but his desire to live pulled him out of it. One day in 1938, Keaton was playing bridge at his mother’s house with some friends and he met a 19-year-old girl who also liked bridge. Eleanor Norris liked this humorous man who was so interesting and so kind to her. After a long acquaintance, she encouraged him to marry her and she stayed with him until his death in 1966.

Keaton lived long enough to receive an enthusiastic ovation at the 1965 Venice Fim Festival, but he did not live long enough to accept honors and applause from the new audiences that have come along and embraced his comedic style.
Posted by Silentfilmfanatic at 5:50 AM