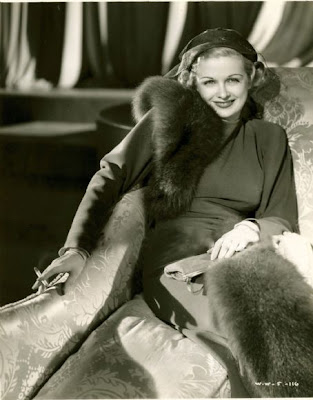 Happy Birthday: Katharine Hepburn! (May 12,1907- June 29, 2003.) Hepburn holds the record for the most Best Actress Oscar wins with four out of 12 nominations. She won an Emmy Award in 1976 for her lead role in Love Among the Ruins, and was nominated for four other Emmys, two Tony Awards and eight Golden Globes.

On TCM, May 11, 2011. Joan Bennett Tribute. ( Pictured above). Bennett performed in more than 70 movies from the era of silent movies well into the sound era. She is best remembered for her film noir femme fatale roles in director Fritz Lang's movies such as The Woman in the Window (1944) and Scarlet Street (1945). Please click picture on side bar to view movie reviews.

Happy Birthday: Henry Fonda! (May 16,1905- Aug.12,1982). He made his Hollywood debut in 1935, and his career gained momentum after his Academy Award-nominated performance as Tom Joad in The Grapes of Wrath(1940). Throughout six decades in Hollywood, Fonda cultivated a strong, appealing screen image in such classics as The Ox-Bow Incident, Mister Roberts and 12 Angry Men. Later, Fonda moved both toward darker epics as Sergio Leone's Once Upon a Time in the West (portraying a villain who kills, among others, a child) and lighter roles in family comedies like Yours, Mine and Ours with Lucille Ball.

Fun Facts from:
IMDb
TCM
Posted by Dawn at 6:23 AM