Beware of These Woman: Yo Ho, Yo Ho.. It's A Pirate Life for Me! 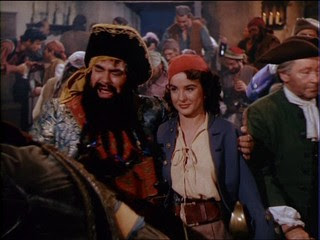 What is it about pirates that causes "bad girls" to throw away their corsets and live a life as a pirate sailing the seven seas? Is it the action packed life, love or the treasure? Maybe ...we will find out by watching these "Pirate Bad Girls", before they make you walk the plank...

Anne of the Indies (1951). Adventure film. It was directed by Jacques Tourneur and produced by George Jessel. The film stars Jean Peters (the future wife of Howard Hughes) and Louis Jourdan, with Debra Paget, Herbert Marshall, Thomas Gomez and James Robertson Justice. The story was to be based on the true life of pirate Anne Bonny. Susan Hayward was originally to play the lead role, but was replaced by Jean Peters.

This swashbuckler is a surprisingly wonderful film, because of the twist of the film, is that the pirate captain of the Sheba Queen, is a woman. Orphaned as a child, she was raised by, Captain Blackbeard . Among her crew is the ship’s drunken yet good hearted doctor, who is her best friend.

When a young Frenchman, is captured from a English ship, Anne hires him as her navigator. Frenchie, shares with her that he is in search of hidden treasure before being captured by the British...

But Blackbeard, doesn't believe him. Providence and LaRochelle fall in love, although he is already married. When LaRochelle tries to deliver her to the British, she kidnaps his wife and escapes. As for revenge, will she sell his wife on a slave-market...

Anne of the Indies, has many beautiful scenes, some sword fighting, along with a troubled love affair. I think you maybe surprised how good this film really is. 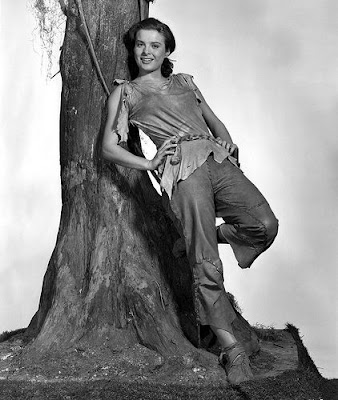 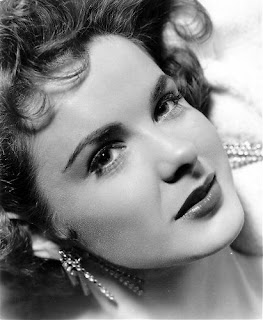 Jean Peters (October 15, 1926 – October 13, 2000). Peters was selected to replace Linda Darnell as the female lead in the film, Captain from Castile (1947) opposite Tyrone Power, when Darnell was reassigned to perform in the film, Forever Amber. Peters spent the next decade performing in period dramas and Westerns. Her second film was, Deep Waters (1948).

Next she performed with Ray Milland in the film, It Happens Every Spring (1949). Afterwards, she starred with Paul Douglas, in the period film, Love That Brute (1950). To prepare for a singing and dancing scene, Peters took a few lessons with Betty Grable's dance instructor.

By 1950, Peters was almost forgotten by the public, even though she was playing several lead roles from 1947. In late 1950, she was even cast in a secondary role as a college girl in, Take Care of My Little Girl (1951). She once became famous for being a small country girl, but as she grew up, the studio did not find her any more suitable roles.

In 1951, Peters, wanted the title role in, Anne of the Indies, which, according to the press, was the film that brought her stardom. Before its release, she was cast in, Viva Zapata! (1952). she was set to play the title role in the film, Wait Till the Sun Shines, Nellie (1952). It was the first time since the beginning of her career that Peters had received this much publicity.

Director Samuel Fuller chose Peters over Marilyn Monroe, for the part of Candy in the film, Pickup on South Street (1953). He thought Peters had the right blend of sex appeal, street smarts he was looking for. Because of the sex symbol status of her character, Peters was not thrilled at taking on this role. She preferred to choose her own roles, as she had done with Anne of the Indies (1951), Viva Zapata! (1952) and Lure of the Wilderness (1952).

Peters and Marilyn Monroe starred together in the film noir, Niagara(1953). In Niagara, Peters replaced Anne Baxter, with whom she co-starred in the film, O. Henry's Full House(1952). In the film Niagara, Peters' character was initially the leading role, but the film became Monroe's film, because by this time she was more popular. Her third film, A Blueprint for Murder(1953), reunited her with Joseph Cotten, with who she had also starred in Niagara with.

Another film starring Peters was the film noir, Vicki (1953). The story of the film, which is a remake of, I Wake Up Screaming. Townsend told that he gave the role to Peters, because she was "one of the greatest sirens he's ever seen." Next, Peters was assigned to replace Crain in the film, Three Coins in the Fountain (1954). The film became a success. Other 1954 films co-starring Peters were the westerns: Apache and Broken Lance.

Following her marriage to Howard Hughes, Peters retired from acting, her final film was, A Man Called Peter (1955). 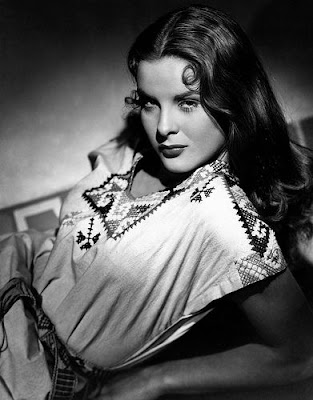 (Sorry no picture) Hurricane Island (1951). Cast: Jon Hall, Marie Windsor and Romo Vincent. The story begins when a Spanish expedition, led by Jose Ponce de Leon, tries to claim a coastal piece of land. The Spaniards are soon attacked by Indians and Ponce de Leon, is injured by a poisoned arrow. The group leaves for Cuba to look for a Dr. Unfortunately, the Dr. is unable to help Ponce de León, and tells Captain Carlos Montalvo, to take Jose Ponce de Leon to a witch doctor. The witch doctor says that Ponce de Leon is under the spell of "Hurricane," God of the Winds, and that he must return to the god's secret shrine, a golden fountain of youth, for the cure. Meanwhile, Jane Bolton, a notorious and beautiful pirate leader, learns about the Spaniards visit to the fountain of youth and assumes that it must be filled with gold. 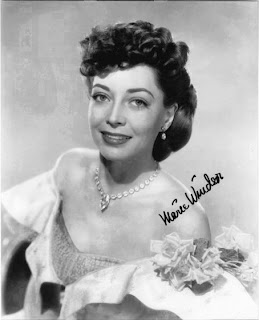 Marie Windsor (December 11, 1919 - December 10, 2000). Windsor was an actress known as "The Queen of the Bs" because she performed in so many film noirs and B-movies. Windsor, a former Miss Utah, trained for the stage and after several years as a telephone operator, a stage and radio actress, and a bit and extra player in films, she began playing feature and lead parts in 1947.

The 5'9" actress's first memorable role was opposite John Garfield in, Force of Evil. Windsor also had large roles in film noirs: The Sniper, The Narrow Margin, City That Never Sleeps and The Killing. 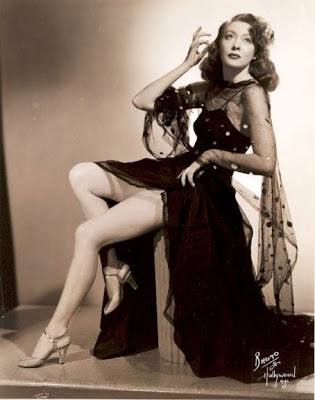 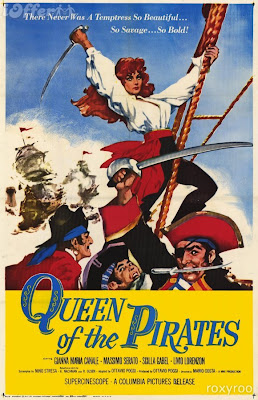 QUEEN OF THE PIRATES (1961). Starring: Gianna Canale. Directed by Mario Costa. In 16th century Italy, on the Adriatic coast, Doruzza, is governed by duke Zulian, and his daughter, Isabella. When they try to commit a injustice against one of their people, the naval officer Mirko and his daughter Barbara stop them and are arrested. The count Cesar de Santacroce, Isabella's fiancee, rescue them and they are set free only to be arrested again by Isabella, who puts them into slavery. Mirko, escapes and manages to get control of the ship, to free his daughter, who becomes the "Queen of the Pirates". 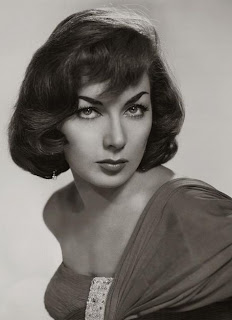 Gianna Canale (12 September 1927 – 13 February 2009). Her looks were compared to those of Ava Gardner. She starred in many sword and sandal films, as well as Italian horror and adventure films. I vampiri, was her last film. She retired from the movie industry in 1964. 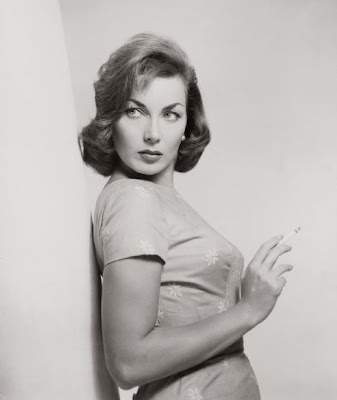 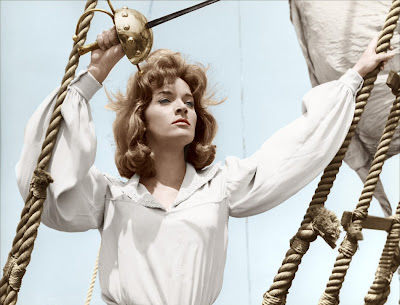 QUEEN OF THE SEAS (1960). Directed by Sergio Grieco. Mary is a girl who dresses like a man and robs the jewels from the pretty ladies. The King's Guard captures her, and she finds herself in the same cell with Peter Goodwin, a nobleman, who pretends to be a robber like her, to win over her trust. After her escape, Mary becomes a pirate under captain Poof. When the captain dies, the only 'man' aboard who is respected by all the pirates is... Mary. 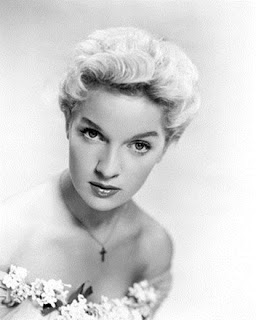 Please click here to view "And Then They Start Sparkling" blog page.
Posted by Dawn at 5:21 AM

Email ThisBlogThis!Share to TwitterShare to FacebookShare to Pinterest
Labels: anne of the indies (1951), beware of these woman, Jean Peters