“An Unseen Enemy” (1912) is a Biograph short directed by D.W. Griffith that is most notable for being the first film of sisters, Lillian and Dorothy Gish. Fifteen minutes in length, this exciting suspense film was probably Griffith’s most complex race to the rescue drama at the time. The story begins with two sisters, played by Lillian and Dorothy Gish, who are mourning their recently deceased father. The sisters have inherited a small sum of money which is deposited in a safe in their home by their brother, played by Elmer Booth, who then leaves for work. Unfortunately, the sisters are left in the care of a housekeeper, played by Grace Henderson, who goes after the money. At this point, we meet Bobby, the younger sister’s boyfriend, played by Robert Harron, who is about to leave for college, but is unhappy that she is too shy to give him a farewell kiss. Meanwhile the housekeeper enlists the help of a disreputable partner, played by Harry Carey, who cracks the safe while she has the sisters locked in a room and terrorize them by firing a gun through a hole in the wall. 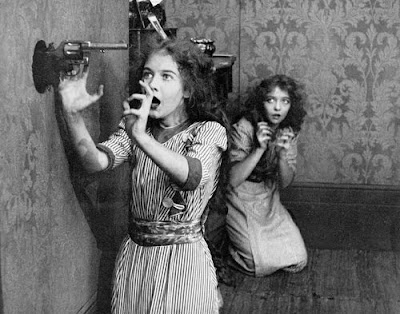 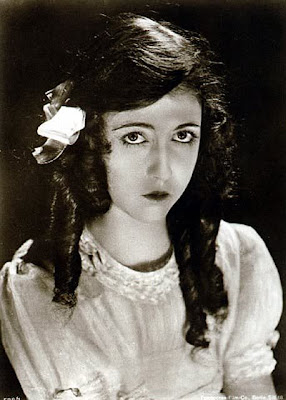 "An Unseen Enemy" is very melodramatic, but it is effectively suspenseful. The set up is rather accurate and the action takes up around half of the duration of the film. I loved the way Griffith threw in various little twists to heighten up the tension like the phone line going dead and the close-up of the gun emerging through a hole in the wall. I was quite impressed with the great photography and the natural style of acting of the Gish sisters and Robert Harron. This Biograph short is worth watching just to see the Gish sisters at the dawn of their film careers.
Dorothy Gish, who as an adolescent entered films in D.W. Griffith’s one-reelers, helped establish the art of silent film acting and motion picture development. Even though she enjoyed a career that spanned six decades, she is barely remembered. Dorothy was famous as a comedienne in an era dominated by male clowns. Were it not for her relation to Lillian Gish and her dramatic performance in D.W. Griffith’s “Orphans of the Storm” (1921), she probably wouldn’t be remembered at all. Dorothy was born on March 11, 1898, in Dayton, Ohio into a broken family after her father walked out on his wife and first child, Lillian. Their mother had the two girls onstage at a very early age. The girls and their mother lived a less than glamorous life, but took whatever roles they could to survive. Virtually all of the Gish girls’ youth was spent in the theatre until 1912 when they decided to go visit the studio where their good friend from the theatre, Gladys Smith, known as Mary Pickford on the screen, was working. The girls visited the Biograph studio on East 14th Street in New York City and were introduced to D.W. Griffith. He immediately put them to work, and their first starring role was in a suspense drama, “An Unseen Enemy” (1912). The Gish sisters became a mainstay of Griffith’s stock company appearing in dozens of shorts. Dorothy and Lillian were included in Griffith’s first attempts at feature length films such as “Judith of Bethulia”(1914) and “Home Sweet Home” (1914) but Dorothy was not used in his epic, “The Birth of a Nation” (1915). However, Dorothy’s role as the “Little Disturber” in “Hearts of the World” (1918) brought her recognition. Realizing her comedic talent, Paramount signed her to a contract and she made 14 films for the company over the next four years. One of these was “Remodeling Her Husband” (1920) which co-starred her husband-to-be, James Rennie, and was the only film ever directed by Lillian. Dorothy co-starred twice more with her sister in “Orphans of the Storm” (1921) and “Romola” (1924). Dorothy made 17 films from 1920 to 1929, one of the most popular was the English made Nell Gwynne (1926). Dorothy’s last silent film was “Madame Pompadour” (1927). After her first sound film, “Wolves” (1930), Dorothy spent almost all of her time in a very successful career on the stage. Dorothy returned to the big screen again for “Our Hearts Were Young and Gay” (1944), “Centennial Summer”(1946), “The Whistle at Eaton Falls” (1951), and “The Cardinal” (1963). Dorothy Gish died on June 4, 1968 of bronchial pneumonia. She was 70 years old. 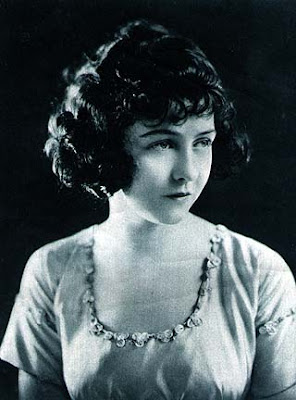 Posted by Silentfilmfanatic at 5:45 PM