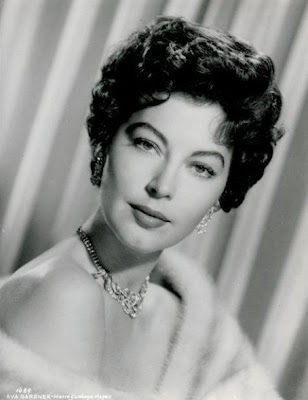 ON TCM: Nov. 9, 2010. Edna May Oliver Happy Birthday Tribute. During the 1930s, she was one of the American screen's best-known character actresses often playing tart-tongued spinsters.

ON TCM, Nov.11, 2010. The Ava Gardner(pictured above) Star of the month continues.  Barefoot Contessa (1954). Click picture on side bar to read review. The film is about the life and loves of fictional Spanish sex symbol Maria Vargas. It was written and directed by Joseph L. Mankiewicz and stars Humphrey Bogart, Ava Gardner and Edmond O'Brien.

ON TCM Special Event: Nov. 13, 2010. Wright was nominated for the Academy Award for Best Supporting Actress for her screen debut in The Little Foxes (1941). The following year, she was nominated again, this time for Best Actress for The Pride of the Yankees, in which she played opposite Gary Cooper as the wife of Lou Gehrig; that same year, she won Best Supporting Actress as the daughter-in-law of Greer Garson's character in Mrs. Miniver. No other actor has ever duplicated her feat of receiving an Oscar nomination for each of her first three films. Click on picture to view featured films.

*Noir and Chick Flicks side bar is under construction. Hopefully, it will be completed by the end of the week. Please click pictures to read bios and movie reviews. I'm looking to find an easier way to manage and update my movie articles. Sometimes, after watching a movie I may want to add a few more thoughts.*