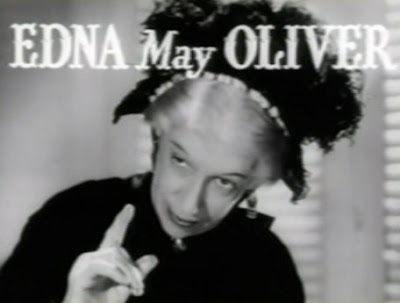 Edna May Oliver, was a descendant of the sixth American president, John Quincy Adams. She left school at age fourteen in order to perform on Broadway in Jerome Kern's musical comedy, Oh, Boy! (1917).

Her film debut was in the film, Wife in Name Only(1923). Oliver first gained notice for her performance with the film, Half Shot at Sunrise(1930).

Edna May Oliver's most popular films were mystery-comedies playing spinster sleuth Hildegarde Withers, from the popular Stuart Palmer novels. The series ended when Oliver left RKO to sign with Metro-Goldwyn-Mayer in 1935.

She received an Oscar nomination for Best Supporting Actress in 1939 for her performance in, Drums Along the Mohawk.

Email ThisBlogThis!Share to TwitterShare to FacebookShare to Pinterest
Labels: birthday, edna may oliver