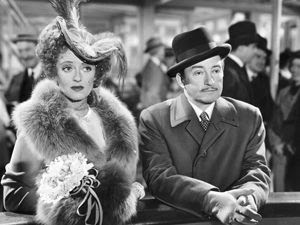 Mr. Skeffington (1944). Directed by Vincent Sherman, based on the novel of the same name by Elizabeth von Arnim. Cast: Bette Davis and Claude Rains.

When Fanny learns that her brother Trippy, has embezzled money from Jewish stockbroker Job Skeffington, she would do anything to save him, including marry his boss. Because of his prejudice against Skeffington being a Jew, Trippy leaves to fight in the Lafayette Escadrille in World War I.

Job loves Fanny, but.. she does not return his feelings and mostly ignores him. She becomes pregnant with his child, but, after she learns of Trippy death, she blames him and leaves his bed. She enjoys playing the wealthy socialite, with a long line of younger lovers.

Lonely, Job has his own affairs, when Fanny finds out, she divorces him. Her daughter, also named Fanny, wants to be with her father and begs him to take her with him to Europe. Fanny is relieved to be free of her child and does not see her for many years.

Even though Fanny lives a fast party girl life, she keeps her beauty until she catches diphtheria, it takes over health and her beauty. In denial, she invites her old lovers (and their wives) to a party. Everyone is shocked by how much Fanny has changed. To make things more complected, her latest suitor Johnny Mitchell, falls in love and marries her daughter, who has returned from Europe because of the rise of the Nazis. Now, Fanny is left very much alone.

Fanny's cousin George Trellis, brings Job back to Fanny's home, unannounced. The Nazis have left Job penniless and blind, George tells Fanny and he asks her if she will help Job, as he has nowhere else to go..

When she enters the parlor, Fanny, sobbing, takes his arm and guides him up the staircase, she tells the maid that "Mr. Skeffington has come home." Job had once, told Fanny that, "A woman is beautiful when she's loved, and only then." George tells Fanny that, at that moment, she has never been more beautiful.

I thought Claude Rains was wonderful as the patient Job Skeffington. Bette Davis, seems to really take her part as Fanny very seriously. Even though this may not be one of the best movies of Bette Davis career, it is one of my favorite movies. 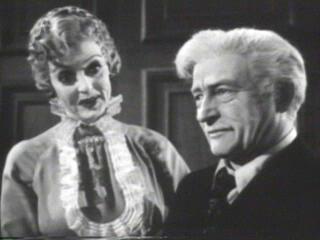