“Enoch Arden” (1911) is one of the best Biograph shorts under the direction of D.W. Griffith, an American pioneer film maker. Thirty- three minutes in length, this film is also the first Biograph two-reeler. Based on a poem by Alfred Lord Tennyson, “Enoch Arden” (1911) was released as two parts even though many theatres showed it as one. The story begins in an 18th century fishing village where a fisherman, Enoch Arden, played by Wilfred Lucas, is pursuing a girl, Annie Lee, played by Linda Arvidson. A wealthy man, Philip Ray, played by Francis J. Grandon, is also pursuing Annie. Enoch wins the girl and marries her. After a few years, the couple have two children. When Enoch cannot afford to pay the bills, he decides to go to sea on a fishing vessel for an extended voyage over Annie’s objections. Unfortunately, Enoch is shipwrecked and swims to a deserted island. Many years pass and Annie is still hopeful that Enoch will return. Through the years, Annie’s friend, Philip Ray, has asked her to marry him, but she always refused. After her two children, played by Florence LaBadie and Robert Harron, are teenagers, Annie agrees to marry Philip and they have a child. A short time later, Enoch is rescued and returns to the village. 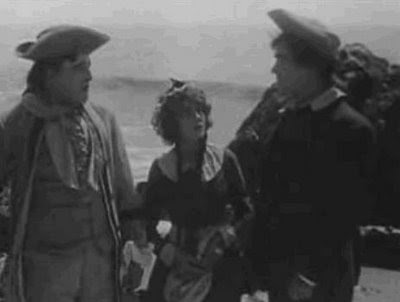 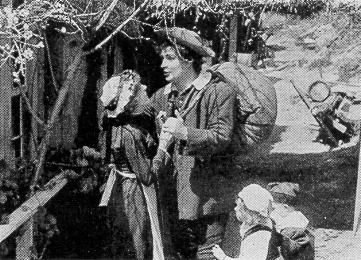 “Enoch Arden” (1911) was really an important breakthrough in filmmaking. Griffith certainly was beginning to develop the emotional impact of his camera work. Around this time he had been experimenting with the close-up to clarify an action or object. I loved the scene in which Annie gives Enoch the baby’s curls and the camera moved closer to the actors to make the audience involved in this touching moment. The scene in which Annie screams in terror at the moment when her husband is shipwrecked far away is a fine example of cross-cutting. What made Biograph films different from the rest were the innovative techniques Griffith introduced into pictures. Griffith raised motion picture acting to a higher level which won for it recognition as a genuine art form.

One of the most beautiful and talented actresses of her era, Florence LaBadie was an enormously popular star. Born in Manhattan on April 27, 1888, Florence grew up to become the ideal Gibson Girl: healthy, sporty, and cheerful. In 1908, when Florence and her parents were living in New York’s Upper West Side, she began her acting career touring in stock. Florence worked also as an artist’s model and magazine cover girl. Fellow actress Mary Pickford introduced Florence to Biograph’s D.W. Griffith in the summer of 1909, where she picked up several bit parts. Griffith rarely gave Florence featured roles, and she found herself in competition with Mary Pickford, Florence Lawrence, and Blanche Sweet. Among her noticeable roles was as Robert Harron’s sister in the two-reel “Enoch Arden” (1911). By the summer of 1911, Florence decided it was time to look around at more nurturing studios. After spotting Florence in one of her bit parts at Biograph, Edwin Thanhouser got in touch with her and asked her to join the three-year-old Thanhouser Film Corporation in New Rochelle, New York. Thanhouser was known for filmed versions of classics as well as popular fare. Its stars included James Cruze, Mignon Anderson, and Irving Cummings. They even had their own dog star, Shep. Charles Hite, acting on behalf of an investment group, bought the studio from Edwin Thanhouser in 1912, and its fortunes continued to skyrocket. Florence appeared in an impressive 45 films in 1912 and another 38 in 1913. Early in 1914, Florence was given the leading role in the twenty-two-part “The Million Dollar Mystery,” cementing her position as her studio’s top female star. Although no stars did their own stunts, Florence did as many as Charles Hite would allow her. Florence made another 22 films in 1915. She continued to be a risk taker and a daredevil. She occasionally rode a motorcycle to the studio, and she took aviation lessons on Long Island. On August 22, 1914, Charles Hite, only 39 years old, died in a car accident, shattering Florence and the other Thanhouserites. Edwin Thanhouser resumed ownership of the studio. Hite’s death put the studio on a slow decline, and it began releasing films via Pathe. Many stars left the studio, but Florence stayed put. In April 1916, Florence signed a new star contract, and that June, Edwin Thanhouser rewarded her loyalty with a new car. Florence made only 13 films in 1916 and 1917, as Thanhouser began to wind down its operations. On August 28, 1917, Florence and her boyfriend, Daniel Carson Goodman, were injured in acar accident outside Ossining (about 30 miles north of Manhattan). Goodman survived the wreck. Florence lingered painfully in the hospital for two months before succumbing to internal injuries on October 13, 1917. Another victim was Thanhouser. Less than a year after Florence LaBadie’s death, Edwin Thanhouser sold the studio, and it ceased production.
Posted by Silentfilmfanatic at 4:06 PM