Thrillers and Chillers - THE UNINVITED (1944) 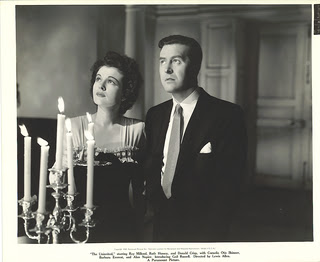 A brother and sister (Ray Milland, Ruth Hussey) move into an old seaside house they find abandoned for many years on the English coast. Their original enchantment with the house diminishes as they hear stories of the previous owners and meet their daughter (Gail Russell, now a young woman) who now lives as a neighbor with her grandfather. Also heard are unexplained sounds during the night. It becomes obvious that the house is haunted. The reasons for the haunting and how they relate to the daughter whom the brother is falling in love with, prove to be a complex mystery. As they are compelled to solve it, the supernatural activity at the house increases to a frightening level.


Solid ghost thriller that ranks right up there with The Innocents and The Haunting.

The beautiful song "Stella By Starlight" was written specifically for this movie and is featured several times. In the movie Roderick Fitzgerald "writes" it for Stella Meredith.


Some of the interior sets of Windwood Manor, such as the main staircase and parlor, were re-dressed sets from the 1942 film I Married a Witch (1942).


Helen Walker and Veronica Lake were tested for the lead roles.

Email ThisBlogThis!Share to TwitterShare to FacebookShare to Pinterest
Labels: ray milland, ruth hussey, the 40s, the uninvited(1944), thrillers and chillers