Thrillers and Chillers: I Walked With a Zombie (1943). 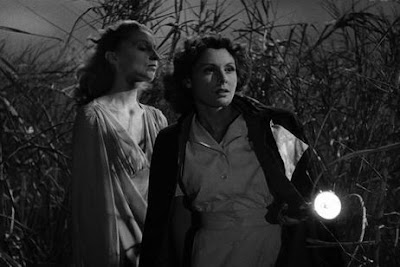 Walked with a Zombie(1943). Directed by Jacques Tourneur. Cast: Frances Dee, Christine Gordon and Tom Conway. It was the second horror film from producer Val Lewton, the first was, Cat People. Lewton was given the film's title and with the help of the writers, he created the story around the title, in this case borrowing elements of Charlotte Brontë's Jane Eyre.

Nurse Betsy Connella, tells her story in a narration how she "walked with a zombie.": Betsy is hired to care for Jessica Holland, the wife of Paul Holland, who is the owner of a sugar plantation on a Caribbean island.

That night at dinner, Betsy meets Paul’s half-brother Wesley Rand and they share a story about their mother, Mrs Rand. While getting ready for bed, Betsy hears a woman crying. She goes to see who's crying and ends up at the tower stairwell. There she sees Jessica Holland, who walks towards her like a ghost. Betsy screams for help, Paul tries to comfort her and takes Jessica back to her room.

The next morning, Betsy meets Jessica's physician, Dr. Maxwell, who tells her that Jessica sleepwalking, is caused by an incurable tropical fever.

Later, Betsy goes to town and runs into Wesley Rand, drinking himself into a stupor, while there, she hears a song about how Jessica had an affair with Wesley and was struck into a permanent state of shock. In the evening Betsy meets Mrs Rand, Wesley and Paul's mother, who is also a doctor. Back at the Fort, distant drums of a Voodoo ritual can be heard. Paul apologizes for bringing her to the island and blame's himself for his wife's condition. Betsy realizes that she is in love with Paul, in spite of his mood swings. She makes up her mind to make him happy by curing Jessica. Betsy takes Jessica on a nightmarish journey, to visit a Voodoo priest. Betsy is shocked to find who the priest really is. Will Jessica ever be cured?

A haunting, suspenseful, thriller. Loved the dash of 'Jane Eyre' and the West Indies setting. Tom Conway and Frances Dee are both very good. If you've never seen the film, I walked With a Zombie, I think you are in for a special treat! 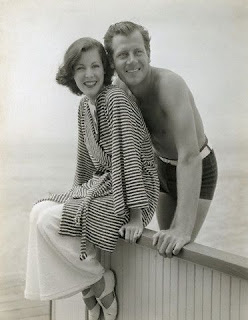 Frances Dee, big break came when she was offered the lead opposite Maurice Chevalier in, Playboy of Paris. Later she performed in, An American Tragedy. She met actor Joel McCrea on the set of the film, The Silver Cord (1933). They married on October 20, 1933, after a whirlwind courtship, and remained married until McCrea's death in 1990. 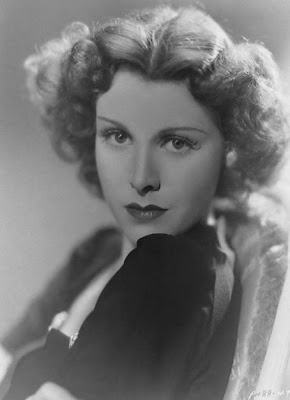 Email ThisBlogThis!Share to TwitterShare to FacebookShare to Pinterest
Labels: christine gordon, frances dee, i walked with a zombie(1943), the 40s, thrillers and chillers, tom conway