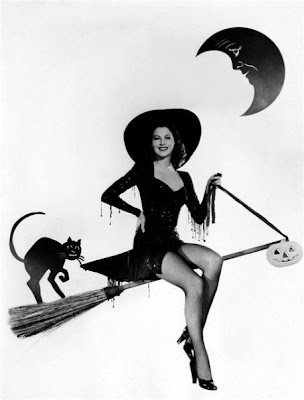 Happy Halloween from Ava Gardner(pictured above), who is also going to be TCM's November Star of the month, Thursdays in November. Ava was signed to a contract by MGM Studios in 1941 and performed in small roles until she drew attention with her performance in The Killers (1946). She became one of Hollywood's leading actresses, considered one of the most beautiful women of her day. She was nominated for the Academy Award for Best Actress for her work in Mogambo (1953).


ON TCM: Nov. 2, 2010. Burt Lancaster Happy Birthday Tribute. Burton was best known for his athletic physique, smile and, later, his willingness to play roles that went against his initial "tough guy" image. He became one of the best actors of his era.

ON TCM: Nov. 3, 2010. Betty Hutton Tribute. Energetic, "blonde bombshell" actress-singer of the 1940s. Please check out Singin and Dancing Back in Time, for more info.(located on the side bar).

ON TCM: Nov. 4, 2010. The Killers(1946), American film noir. It is based in part on the short story of the same name by Ernest Hemingway. The film was directed by Robert Siodmak and features Burt Lancaster in his screen debut, as well as Ava Gardner, Edmond O'Brien, and Sam Levene. An uncredited John Huston co-wrote the screenplay.

This Month on Singin' and Dancing Back in Time: Monty and I are going to celebrate Ginger Rogers, one of our favorite actress. I hope you will enjoy what we have planned.

Have a safe and fun Halloween!
Posted by Dawn at 5:02 AM