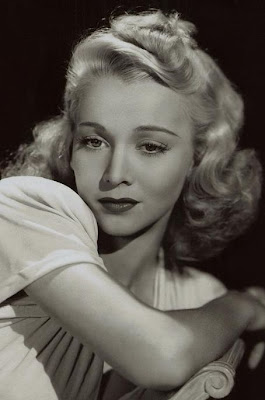 This weeks Chick Flicks at the Movies: Behind Green Lights (1946). Police lieutenant Sam Carson investigates a political murder after the victim is dumped at the door of police headquarters. Cast: Carole Landis(pictured above). Click picture on side bar to view movie.

ON TCM: Wed, Sept. 8th. Springtime in the Rockies is a musical comedy film. Starring Betty Grable , with support from John Payne and Carmen Miranda, Cesar Romero, Charlotte Greenwood, and Edward Everett Horton. Also in the cast was Grable's future husband Harry James, and his band. The director was Irving Cummings. Click picture on side bar to read review.

ON TCM: Fri. Sept. 9th. Until the Clouds Roll By (1946). Musical film  is a fictionalized biography of composer Jerome Kern, who was originally involved with the production of the film, but died before it was completed. Robert Walker portrays Kern. Click picture on side bar to read review.

Also, I wanted to let everyone know who posts articles here on the Noir and Chick Flicks pages. I have switched over to the new "editor" in "settings". I hope that it will work out better for you.

Have a great weekend.
Posted by Dawn at 4:16 AM