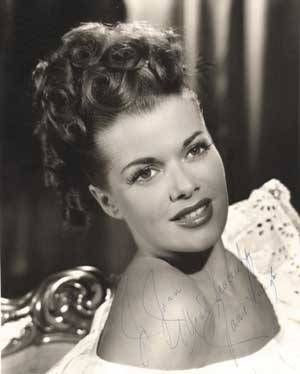 In my opinion Janis Paige (born September 16, 1922) , is a underrated actress.  She began singing  from the age of five in local amateur shows. She then moved to Los Angeles after graduating from high school and then got a job as a singer at the Hollywood Canteen during World War II. That is where Warner Bros. first saw saw her and signed her up. She began her film career co-starring in musicals, where she performed with either Dennis Morgan or Jack Carson. She later performed in adventures and dramas . Following her role in the film, Two Gals and a Guy (1951), she decided to leave Hollywood .

She then went on to Broadway to perform in , Remains to Be Seen(1951), co-starring Jackie Cooper. She also toured  as a cabaret singer.

Stardom came in the Broadway musical, The Pajama Game(1954). (Doris Day went on to play the role on film.) After a six-year hiatus, Paige returned to films in Silk Stockings (1957), which starred Fred Astaire and Cyd Charisse, plus the Doris Day comedy Please Don't Eat the Daisies (1960),  followed by a role in Bachelor in Paradise with Bob Hope (1961). Sorry this wonderful clip of Janis does not have sound.