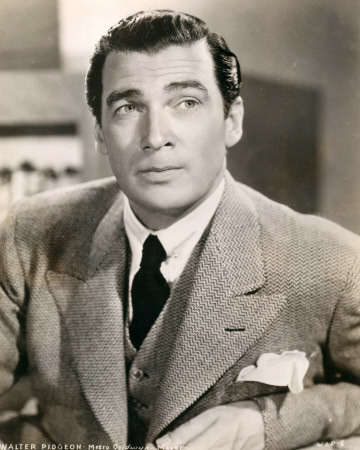 When Walter Pigeon moved to New York City, he walked into the office of E. E. Clive, announced that he could act and sing, and said was ready to prove it. After acting on stage for several years, he made his Broadway debut in 1925.

Pidgeon made a number of silent movies in the 1920s, where he soon became a star. With the arrival of talkies, he was fortunate enough to have a wonderful singing voice, so he moved on to musicals: The Bride of the Regiment (1930), Sweet Kitty Bellairs (1930), Viennese Nights (1930) and Kiss Me Again (1931).

When the public grew tired of musicals, his career began to take a set back. He played secondary roles in the films: Saratoga and The Girl of the Golden West. One of his better known roles was in, The Dark Command, where he played the villain opposite John Wayne, Claire Trevor, and Roy Rogers.

It was not until he starred in How Green Was My Valley, that he became popular again. He then starred opposite Greer Garson in Blossoms in the Dust, Mrs. Miniver (for which he was nominated for the Academy Award for Best Actor) and its sequel, The Miniver Story. He was also nominated in 1944 for Madame Curie, again opposite Garson.

Although, he continued to make films: Week-End at the Waldorf and Forbidden Planet, Pidgeon returned to work on Broadway in the mid-1950's after a twenty-year break, and was featured in, Take Me Along, with Jackie Gleason. He continued making films, Voyage to the Bottom of the Sea(1961), Big Red (1962), and in Advise & Consent (1962). The movie was directed by Otto Preminger. The cast: Henry Fonda, Charles Laughton, Don Murray, Walter Pidgeon, Peter Lawford, Gene Tierney, Franchot Tone, Lew Ayres, Burgess Meredith, Eddie Hodges, Paul Ford, George Grizzard, Inga Swenson, Betty White. The film shows the consequences in Washington, D.C. when the President nominates a man with a hidden past for Secretary of State.

Email ThisBlogThis!Share to TwitterShare to FacebookShare to Pinterest
Labels: summer under the stars 2010, walter pidgeon