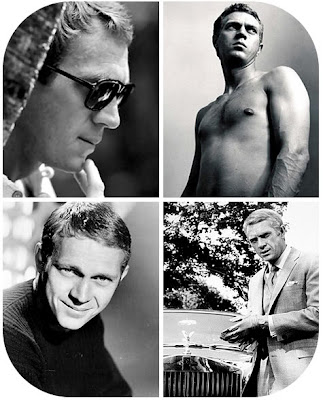 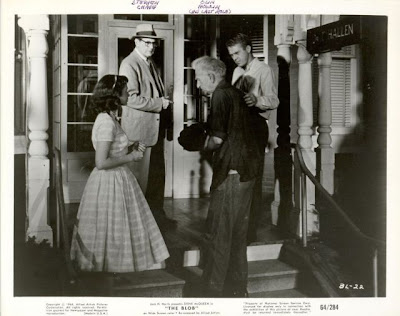 Steve McQueen, received an Academy Award nomination for his role in The Sand Pebbles. His other popular films include The Magnificent Seven, The Great Escape, The Thomas Crown Affair, Bullitt, The Getaway, Papillon, and The Towering Inferno. The Blob(1958), is an independently made American horror/science-fiction film. It was not until Steve McQueen became famous with the TV series Wanted: Dead or Alive that the film became a hit at the drive-in theatres. Today, the film is recognized as one of the quintessential 1950s American sci-fi/horror films.

The film the "Blob", was Steve McQueen's debut performance. The film's theme song, "Beware of the "Blob" (recorded by studio group the Five Blobs—actually singer Bernie Nee overdubbing himself, was written by Burt Bacharach and Mack David and was a nationwide hit in the U.S.

Steve Andrews and his girlfriend Jane Martin are out late at night watching falling stars. When they see a meteor hit the ground. They drive out to try to find where the meteor landed. An old man finds the meteor first and pokes it with a stick. The rock opens where there is a small jelly-like blob inside. The blob, still alive, crawls up the stick and attaches to his hand. Panicked, the man runs onto the road, where he is seen by Steve, who takes him to see Dr. Hallen.

While Dr. Hallen helps the injured man he sends Steve back to the crash site to find out more information. The blob completely consumes the old man, the nurse and the doctor, getting bigger all the time.

Steve and Jane go to the local police and return to the clinic with Lt. Dave and Sgt. Burt, where they find no sign of the creature or the doctor. The police do not believe Steve's story. Steve and Jane are sent home with their fathers, but sneak out and locate all their friends, to ask them to help warn the town.

In the meantime, the blob has killed a mechanic, the janitor and a bar room of late-night drinkers. Steve and Jane find the blob in the grocery store and hide in the walk-in refrigerator. The blob starts to come in under the door but then retreats. Steve and Jane escape and set off the town's fire alarms. The whole town gathers and demands to know what is going on. The people in the theater run screaming running for their lives alerting the town to where the blob is. Jane's little brother confronts the blob with his cap gun. Jane and Steve run in the diner after him but become trapped along with the owner and a waitress. How will they escape with their lives?

I thought the special effects were cheesy fun, as is the story.
Posted by Dawn at 4:12 AM

Email ThisBlogThis!Share to TwitterShare to FacebookShare to Pinterest
Labels: steve mcqueen, summer under the stars 2010, thrillers and chillers