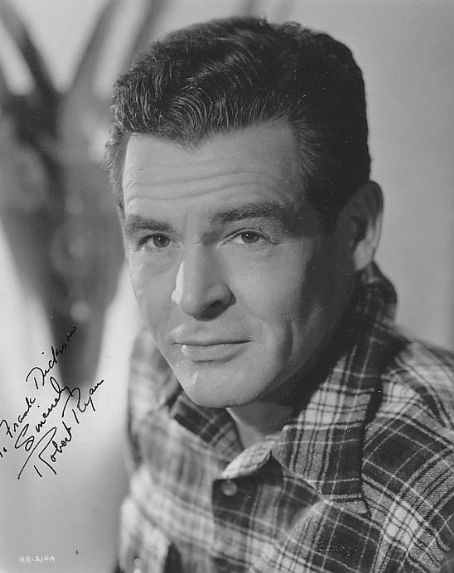 Robert Ryan, studied acting in Hollywood and performed in small film parts during the early 1940s. In January 1944, after making a contract with RKO Radio Pictures, Ryan enlisted in the United States Marine Corps and served as a drill instructor at Camp Pendleton, in San Diego, California. At Camp Pendleton, he became friends with writer and future director Richard Brooks.

Robert Ryan, often played hardened cops and ruthless villains. Ryan's first film performance was in Crossfire (1947), a film noir based on Brooks's novel. The film is about a man who is killed by a drunken, American soldier because he was Jewish. The film also shows the post-World War II issue of soldiers being released from the military with no training other than as soldiers. The role won Ryan his only Oscar nomination, for Best Supporting Actor.

In the film, On Dangerous Ground (1951) he played a burnt-out city cop finding redemption while solving a murder.

Email ThisBlogThis!Share to TwitterShare to FacebookShare to Pinterest
Labels: robert ryan, summer under the stars 2010