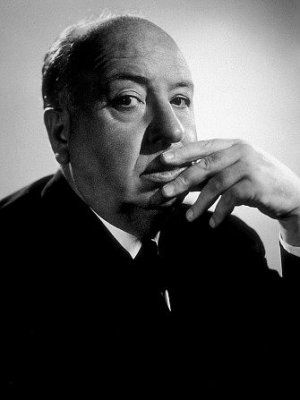 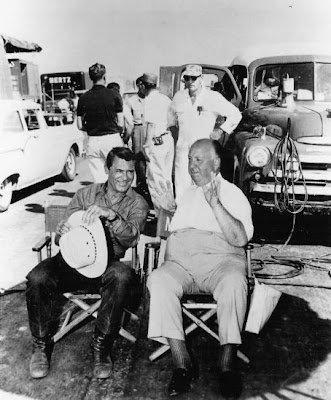 What I loved about Alfred Hitchcock as a director, was his gift for trying out new techniques in the suspense and the thriller genres. And most of all.. I loved his cameo appearances in 39 of his 52 films: He could be seen boarding a bus, crossing in front of a building, standing in an apartment across the courtyard.

One of my favorite cameos is in the film, Strangers on a Train(1951). Where Alfred Hitchcock, is carrying a bass case onto the train.(I think it is so cute). The movie is about tennis star Guy Haines who wants to divorce his unfaithful wife, in order to marry the woman he loves. While on a train to meet Miriam, Haines meets the psychopathic Bruno Anthony. Bruno knows about Guy's marital troubles from reading the gossip newspapers. Bruno tells Guy about his idea for a perfect murder. He will kill Miriam and in turn, Guy will kill Bruno's father. Since both are strangers, nobody will suspect them of the crimes. Guy leaves the train, while Bruno thinks he has agreed to the idea. 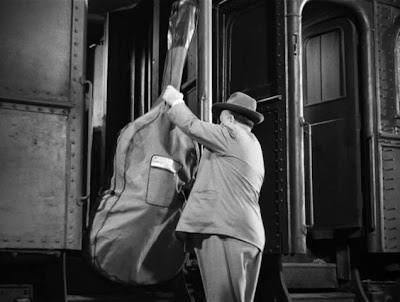 Another one of my favorite cameos is in the film, The Birds(1963). Suspense/horror film based on the 1952 novel The Birds by Daphne du Maurier. It takes place in Bodega Bay, California which is, suddenly and for unexplained reasons, attacked by birds over a couple of days. Hitchcock's cameo, is when he is walking out of the pet shop with his own two furry friends. 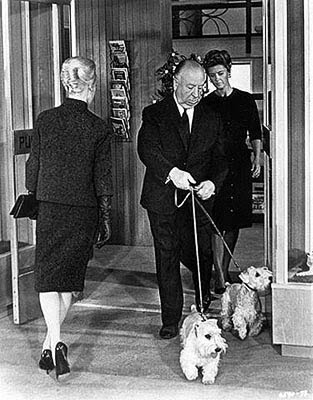 Hitchcock's longest cameo was in the films, Blackmail and Young and Innocent.

Director Richard Franklin also adds a Hitchcock cameo into Psycho II (1983), even though Hitchcock had passed away three years before. Mary Samuels and Norman Bates pay a visit to Mother's bedroom, Hitchcock's silhouette can be seen in shadow on the far right wall just after they enter the room. Which I think is a wonderful tribute to Alfred Hitchcock.

Video: Of some of Alfred Hitchcock's cameos set to music.