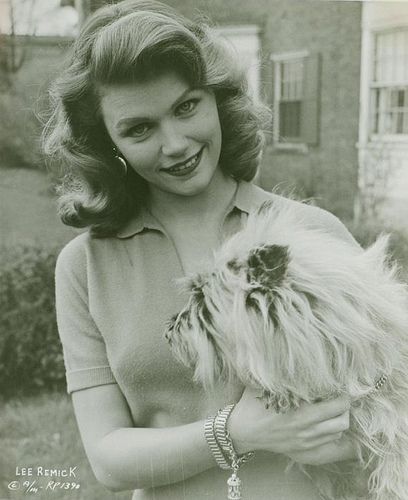 Lee Remick made her first film performance in, A Face in the Crowd. While filming the movie in Arkansas, Remick lived with a local family and practiced baton twirling.

Remick became famous in her performance in the film, Anatomy of a Murder (1959), a trial court drama film directed by Otto Preminger and written by Wendell Mayes based on the best-selling novel of the same name written by Michigan Supreme Court Justice John D. Voelker . Voelker based the novel on a 1952 murder case in which he was the defense attorney. Cast: James Stewart, George C. Scott, Lee Remick, Ben Gazzara, Arthur O'Connell, Eve Arden, Kathryn Grant, Brooks West (Arden's real-life husband), Orson Bean, and Murray Hamilton. The judge was played by Joseph N. Welch, a real-life lawyer famous for berating Joseph McCarthy during the Army-McCarthy Hearings. The film is famous as one of the first Hollywood films to talk about sex.

In 1962, she was nominated for an Academy Award as Best Actress for her performance as the alcoholic wife of Jack Lemmon in Days of Wine and Roses.

When Marilyn Monroe was fired during the filming of the comedy Something's Got to Give, the studio announced that Remick would be her replacement. Co-star Dean Martin said that while he admired Remick, he had signed on to do the picture to work with Monroe.

She co-starred with Gregory Peck in the horror film, The Omen(1976).

Remick later performed in several made-for-TV movies or miniseries (for which she earned seven Emmy nominations). Most were of a historical nature, including two noted miniseries: Ike, in which she portrayed Kay Summersby, alongside Robert Duvall as General Dwight Eisenhower and Jennie: Lady Randolph Churchill where she portrayed the title character, Winston Churchill's mother.
Posted by Dawn at 4:15 AM

Email ThisBlogThis!Share to TwitterShare to FacebookShare to Pinterest
Labels: lee remick, summer under the stars 2010