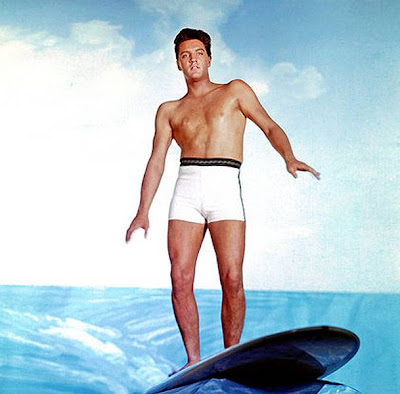 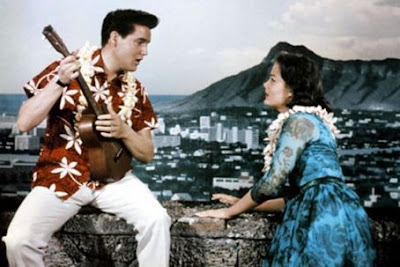 Another one of my favorite beach movies is the film, Blue Hawaii (1961) a musical filmed in Hawaii. Cast: Elvis Presley. After two years in the Army, Chad Gates returns home to Hawaii, happy to be back with his surfboard and beach buddies.

He rebels against his wealthy and domineering parents by not going to work for the family pineapple business. Chad decides to go to work as a guide for the same tourist agency where Maile, his Hawaiian girl friend works. His first job is to show school teacher Abigail Prentace and four teen aged girls around the Hawaiian Island..

At a luau, Chad gets into a fight with a drunken tourist who is making inappropriate moves on one of the teenage girls. He is arrested and thrown in jail. Chad's mother blames the fight on Maile's bad influence. Maile is worried about Abigail's interest in Chad.

FUN FACTS:
The closing scene, was shot at the Coco Palms Resort on Kauai, where Elvis was staying when filming the movie. Cameo: (Hal B. Wallis) walking down the street.

About seven minutes before the end of the film. Maile is peeking through the blinds, you will see a couple paddling a canoe. The blond woman seated up front, is singer Patti Page. Patti was then married to Charles O'Curran, a choreographer for many films produced by Hal B. Wallis, including "Blue Hawaii."

What I liked most about this fun film was the location and Angela Lansbury's performance as Elvis's crazy Southern Belle mama.
Posted by Dawn at 6:00 AM