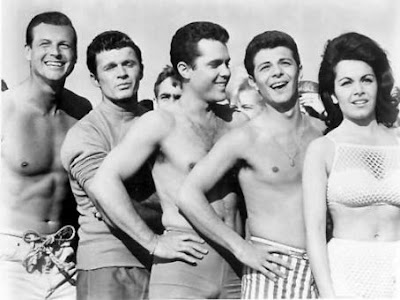 The film is about, a group of fun-loving teenagers who live on their own terms in summer houses along the beach.

An anthropologist, Professor Robert Orwell Sutwell, is secretly studying the "wild mating habits" of Southern California teenagers who hang out at the beach. He temporarily paralyzes Eric Von Zipper, the leader of a motorcycle gang. Who makes unwanted advances on Dolores, who in turn develops a crush on the professor.

Von Zipper and his gang plot to get even with Sutwell.

Although, a stunt surfer was used for long-shots, Robert Cummings was already a surfer by the time he starred in Beach Party. Films of him surfing in Hawaii on the Ken Murray's Hollywood television show a fit young Bob surfing on an old style long board. 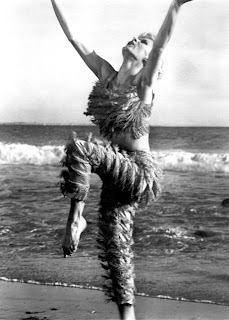 Candy Johnson, is a singer and dancer who performed in several films in the 1960's.

Her best known films are the Beach Party films, in which she played Candy, the barefoot girl who could dance so hard it would literally knock the guys off their feet.

In the first film in the series, Beach Party, she is credited as the "perpetual motion dancer."
Posted by Dawn at 6:23 PM