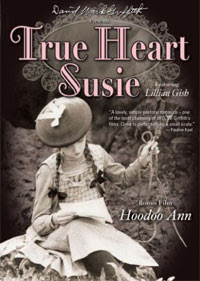 “True Heart Susie” (1919) is a silent romantic drama starring Lillian Gish, Robert Harron, and Clarine Seymour. Directed by D.W. Griffith and adapted from the story by Marian Fremont, this film is about a shy, plain girl who loves her childhood sweetheart but loses him to a more “modern woman.” The story begins with Susie, played by Lillian Gish, secretly in love with the boy next door, William Jenkins, played by Robert Harron, but is afraid to tell him, and he is totally oblivious about her true feelings. Susie secretly sells her cow, Daisy, and other livestock she inherited from her mother to send William away to college to study for the ministry and fulfill his ambition. However, Susie lets William believe that the money comes from this rich man whom once promised to help him. After his college graduation, William returns, and Susie has the satisfaction of hearing him preach his first sermon. Susie’s hopes, however, are shattered when William becomes fascinated by a frivolous and worthless party girl, Bettina Hopkins, played by Clarine Seymour. When Susie accidentally sees William and Bettina kissing, she realizes he is lost to her. Ready to settle down, William surprisingly asks Bettina to marry him. Bettina agrees to marry him because she is tired of working and wants someone to support her instead. Even though Susie is heartbroken, she never confronts William about it. Instead, Susie swallows her pride and grief to serve as bridesmaid at William and Bettina’s wedding. Totally unqualified as a minister’s wife, Bettina starts cheating on William with Sporty Malone, played by Raymond Cannon, and his friends. One day Bettina makes plans to sneak away from William and attend a party with some friends. On her way home that night it starts thundering and Bettina realizes she has lost her key. At this point, she runs to Susie for help and asks her to lie to William for her. With her love married to a hussy how will poor Susie ever find happiness? 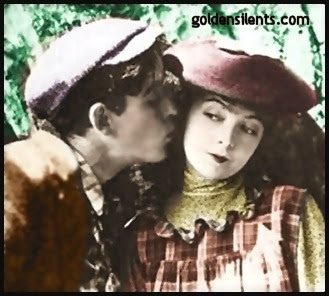 Lillian Gish made her screen debut with her younger sister Dorothy in D.W. Griffith’s “The Unseen Enemy” (1912), a one-reel suspense drama featuring the pair, at American Biograph. “The Mothering Heart”(1913), a two-reeler, first demonstrated the emotional intensity of which Lillian was capable. Griffith must have first become aware of the unique quality of her acting when he directed her at American Biograph. There are few who are not aware of Lillian’s emotionally moving performances for Griffith in “The Birth of a Nation” (1915), “Hearts of the World” (1918), “Broken Blossoms” (1919),”Way Down East” (1920) and “Orphans of the Storm” (1922). Her relationship with Griffith flourished until 1921, when a financial disagreement finally severed their ties. Lillian then became the darling of MGM, where she starred in “The White Sister” (1923), “Romola” (1925), “La Boheme” (1926), “The Scarlet Letter” (1926),“The Wind” (1928), and others. After the introduction of sound, her innocent image seemed dated. When her contract expired, Lillian returned to the stage for many years. Eventually she returned to the screen as a character actress, giving memorable performances in “Duel in the Sun” (1945), “The Night of the Hunter” (1955), and her last film, “The Whales of August” (1987).

Nineteen-twenty was a bad year for both D.W. Griffith and for American filmgoers. That year saw the deaths of two of the director’s brightest young stars, Clarine Seymour and Robert Harron, both of whom might have had brilliant careers ahead of them. Clarine Seymour had a natural, saucy quality that made her an appealing light comedienne. Her curly black hair was just ready for the bob of the new decade. Harron and Seymour were teamed in two features, “The Girl Who Stayed at Home” and “True Heart Susie," both released in 1919. After “The Girl Who Stayed at Home” and “True Heart Susie,” Griffith featured Seymour along with Richard Barthelmess in “Scarlet Days” (1919) and “The Idol Dancer” (1920). Ultimately, “The Idol Dancer” was a waste of time for both its leads, but it did bring Seymour critical and popular praise. The films make it obvious that Griffith was grooming both Seymour and Barthelmess for stardom in the 1920’s. Seymour signed a four-year contract with Griffith and began filming of the role subsequently played by Mary Hay in “Way Down East” (1920), but she died suddenly of an intestinal ailment that didn’t respond to treatment on April 25, 1920. Seymour was only twenty-one years old. Robert Harron was a brilliantly talented actor whose last film with Griffith was the odd, dark “The Greatest Question” (1919), with Lillian Gish. Some feel he was being ousted by Richard Barthelmess, who had appeared in several Griffith films and was being groomed for the male lead in “Way Down East” (1920). When Harron died, some writer speculated that he was heartbroken at Barthelmess usurping his career. Actually, his career was on the upswing when he and Griffith parted amicably. Harron signed on with Metro early in 1920, and he had his own company within the studio. Harron died of a self-inflicted gunshot wound on September 5, 1920. The official certificate listed his death as accidental. Harron was only twenty-seven years old. 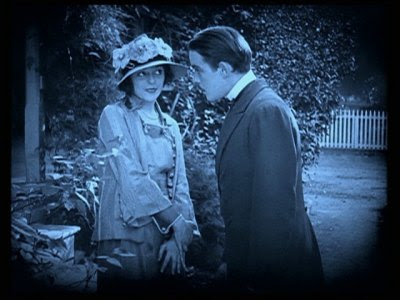 Robert Harron is wonderful as the sincere and naïve young man who is fooled by a superficial woman. Lillian Gish is excellent as the shy, plain, and simple girl who loves Robert Harron. She makes the role interesting and sympathetic with her subtle gestures and expressions. Clarine Seymour almost steals the show from Gish playing the vamp who ensnares Harron. A bittersweet love story, “True Heart Susie” (1919) is one of the most charming of Griffith’s films and a little gem of the silent screen.
Posted by Silentfilmfanatic at 3:04 AM