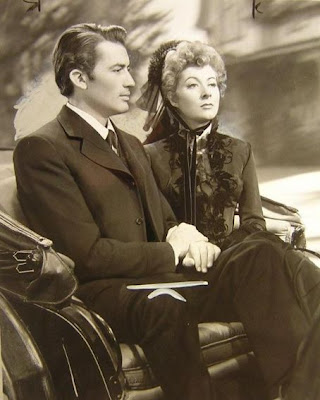 Mary Rafferty lives in a small house with her wheelchair-bound father Pat and her widowed sister, Kate Shannon, in Pittsburgh known as "The Flats." Mary informs her father that she has taken a job as a live-in maid at the home of steel mill owner William Scott. Her father Pat, lost his legs in an accident at Scott's mill and wants revenge against the family, disapproves.

Soon after starting her job, Mary becomes friends with William's wife Clarissa, his daughter Constance and his three sons. Mary falls head over heals in love with Paul, who has just returned home from London and has plans to modernize the furnace at the Scott mill.

I just saw the film The Valley of Decision for the 2nd time. If you love romance, you will love this movie. The cast of characters are wonderful. Although Greer Garson is much older than Gregory Peck. You really do not notice the age difference and their romance is very believable. 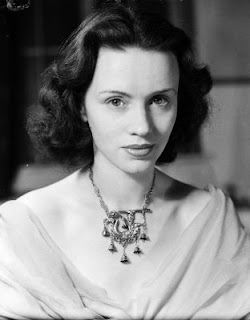 Jessica Tandy began her career at the age of 16 in London, opposite Laurence Olivier and John Gielgud. She moved to the United States and performed in many supporting roles in Hollywood films.

Over the following three decades, her career continued with films: Alfred Hitchcock's, The Birds (1963), and a Tony Award-winning performance in The Gin Game in 1977.

However, it was her performance in Driving Miss Daisy (1989), that earned her an Oscar. She earned a Best Supporting Actress nomination for her work in Fried Green Tomatoes (1991), and co-starred in The Story Lady (1991) telefilm, with daughter Tandy Cronyn), Used People (1992, as Shirley MacLaine's mother), To Dance with the White Dog (1993 telefilm, with husband Hume Cronyn), Nobody's Fool (1994), and Camilla . Camilla was to be her last performance, at the age of 84.
Posted by Dawn at 5:54 AM