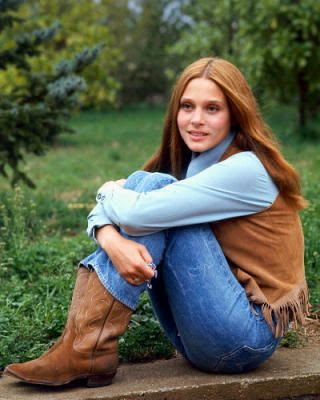 Leigh Taylor-Young, studied classical ballet and attended Northwestern University where she majored in economics. She became interested in theater and was the youngest member of the Eaglesmere Summer Repertory Theatre. Leigh moved to New York and studied under Sanford Meisner at the Neighborhood Playhouse. Her BIG break came when she was cast in "Peyton Place" (1964), where she played Rachael Welles. She met Ryan O'Neal, the couple married in 1967-1973.

Leigh started off in films as a "flower child" of the 1960's. She earned a Golden Globe nomination for "Best Newcomer" when she performed in, I Love You, Alice B. Toklas! (1968). The film is about Attorney Harold Fine, who is about to marry his girlfriend Joyce, but is having second thoughts. He runs into his brother, a hippie living in Venice Beach, and falls for a hippie girl who makes "special" brownies.

Leigh also became an ordained minister in the Movement of Spiritual Inner Awareness, and her voice can be heard in the Search of Serenity series of audio meditations from The Course in Miracles trainings. She is also the grandmother of two granddaughters by her son Patrick O'Neal.
Posted by Dawn at 6:17 AM