Me TV Summer of Classic TV Blogathon: I Dream of Jeannie. 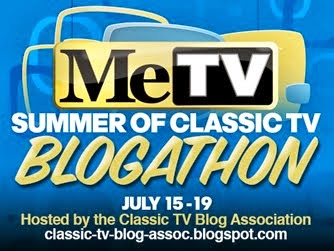 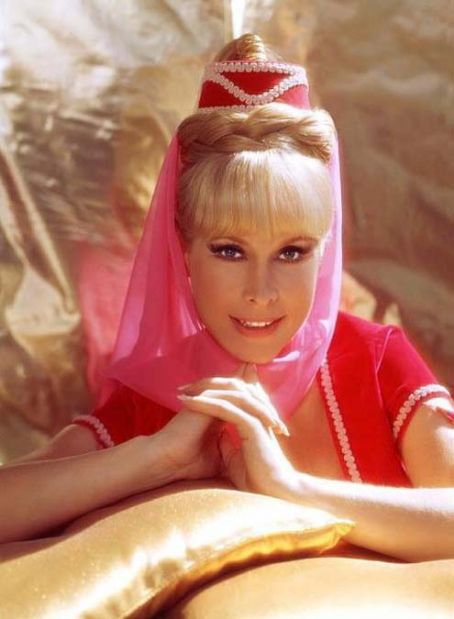 I Dream of Jeannie, is a very charming TV show starring Barbara Eden as a 2,000-year-old genie and Larry Hagman as an astronaut who becomes her master, with whom she falls in love with. The series was created and produced by Sidney Sheldon, who had trouble finding the perfect genie, until he contacted Barbara Eden's agent. 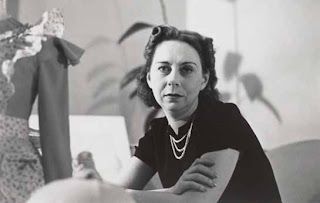 One of her last assignments was creating Barbara Eden's "Jeannie" costumes for I Dream Of Jeannie. Barbara Eden selected the pink/maroon color combination of Jeannie's harem outfit (The two colors symbolize different aspects of Jeannie's personality: pink symbolizes the playful, girlish aspects of her personality while maroon symbolizes the fiery, headstrong aspects of her personality.) Barbara also selected the purple trim of her bottle. Jeannie's '60's-era harem costume is now housed in the Smithsonian Institution in Washington, D.C..

Censors allowed "Jeannie" to be living in a house with an unmarried man because early episodes made it clear that she slept in her bottle, but did not want Eden's navel to be seen.

The makers of the series were also presented with the problem of filming around Eden's real-life pregnancy during the first eleven episodes of season one, without writing it into the story-line.  At first, she wore veils to hide her abdomen. As her pregnancy progressed, producers used body doubles and filmed Eden only above the waist, although her belly is visible in some profile shots. 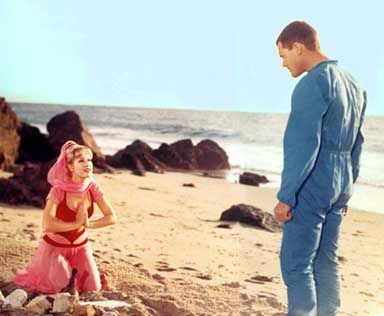 In the pilot episode, "The Lady in the Bottle", astronaut Captain Tony Nelson, US Air Force, is on a space flight when his capsule "Stardust One" comes down on a deserted island in the South Pacific.

On the beach, Tony notices a strange bottle that rolls by itself. When he rubs it after removing the stopper, smoke starts billowing out and a Persian-speaking female genie materializes and kisses Tony.

They cannot understand each other until Tony makes a wish that Jeannie speak English, which she does, then he wishes to be rescued. Tony, who is so grateful that he tells her she's free.

But Jeannie, who has fallen in love with Tony at first sight after being trapped for 2000 years, re-enters her bottle and rolls it into Tony's duffel bag so she can go home with him. 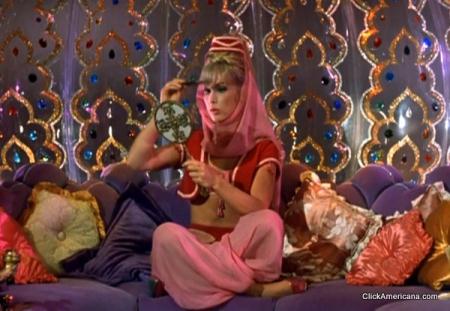 Tony at first keeps Jeannie in her bottle most of the time, but as time goes by he allows her more time out of the bottle. Her desire to please her "Master" gets them in all kinds of trouble.

Tony' wants to keep her hidden because he is worried that he might be dismissed from the space program if her existence were known. Dr. Bellows tries to prove to his superiors that Tony is either crazy or hiding something. 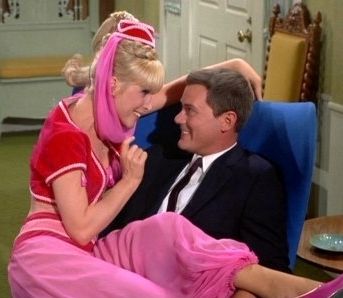 The first bottle was a special Christmas 1964 Jim Beam liquor decanter containing "Beam's Choice" bourbon whiskey. It was designed by Roy Kramer for the Wheaton Bottle Company. For years, it was said that Sidney Sheldon received one as a gift and thought it would be a perfect design for the series.

Several people in the Screen Gems art department also take credit for finding the bottle. There is strong evidence, however, that it was first season director Gene Nelson who saw one in a liquor store and bought it, bringing it to Sidney Sheldon. Jeannie's bottle was left its original dark, smoke-green color, with a painted gold leaf pattern (to make it look like an antique), during the first season.

Since the show was originally filmed in black and white, a lot of colors and patterns were not necessary. When the show switched to color, the show's Art Director came up with a brightly colored purple bottle to replace the original. The first season bottle had a clear glass stopper that Tony took from a 1956 Old Grand-Dad Bourbon bottle in his home, as the original stopper was left behind on the beach where Tony found Jeannie.

In the first color episode, Jeannie returns to the beach and her bottle is seen to have its original stopper (painted to match the bottle), presumably retrieved by her upon her return there. The rest of the TV series (and the movies) used the original bottle stopper. During the first season, in black and white, the smoke effect was usually a screen overlay of billowing smoke, sometimes combined with animation. Early color episodes used a purely animated smoke effect. Sometime later a live smoke pack, lifted out of the bottle on a wire, was used. Jeannie's color-episodes bottle was painted mainly in pinks and purples, while the bottle for the Blue Djinn was a first-season design with a heavy green wash.

No one knows exactly how many bottles were used during the show, but members of the production have estimated that twelve bottles were painted and used during the run of the series. The stunt bottle used mostly for the smoke effect was broken frequently by the heat and chemicals used to produce Jeannie's smoke.

Barbara Eden was allowed to keep the color stunt bottle used on the last day of filming the final episode of the television series. It was given to her by her make-up woman after the show was canceled while the show was on hiatus.

You can own your own Jeannie Bottle by clicking here. 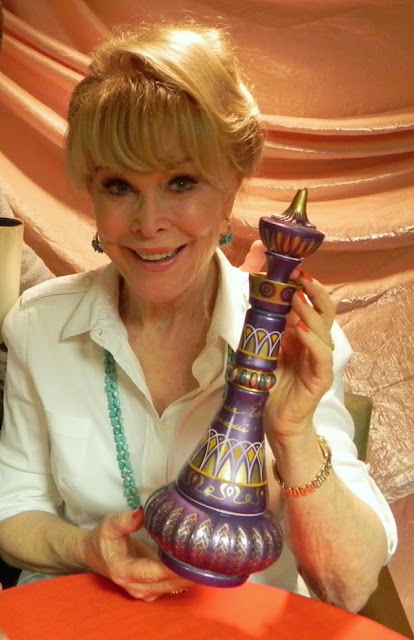 This post is part of Me-TV's Summer of Classic TV Blogathon, hosted by the Classic TV Blog Association. You can go to www.metvnetwork.com to learn more about Me-TV and its summer line-up of classic TV shows.