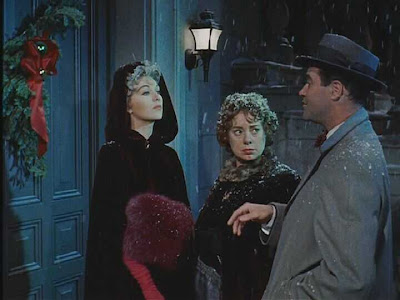 Bell, Book and Candle(1958). Romantic/comedy directed by Richard Quine, based on the successful Broadway play by John Van Druten. Cast: James Stewart and Kim Novak in their second on-screen pairing (after Vertigo, released earlier the same year). The film, adapted by Daniel Taradash, was Stewart's last film as a romantic lead. The supporting cast includes: Jack Lemmon and Ernie Kovacs.

On Christmas Eve, Gillian Holroyd, the owner of a New York gallery of native primitive art, is bored with her life and wants to think up a way to meet her new upstairs neighbor, publisher Sheperd Henderson. When Shep returns home from work that evening, he finds Queenie snooping through his desk, she then introduces herself as Queenie, his neighbor.

After Shep kicks Queenie out of his apartment, her feelings are hurt and to get even with him, casts a spell on his phone. After, discovering his phone is out of order, Shep goes downstairs and asks to use Gil's phone. Before Shep leaves to meet his fiancee, Queenie mentions that she and Gil are going to the Zodiac Club later that night. 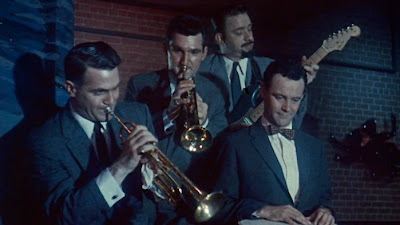 At the club, while Gil's bongo-playing, warlock brother Nicky is playing his drums, Gil tells Queenie that she is bored with her life.

Soon after, Shep enters with his snobbish fiancee Merle Kittridge, who Gil remembers she went to college with and that she reported her to the dean for not wearing shoes. She also remembers, Merle is terrified of thunder and Gil simulates a thunderstorm by directing Nicky and the other musicians to blare their instruments into Merle's ear....

At Gil's apartment/gallery later that night, the  family of witches exchange Christmas gifts and Nicky gives Gil a "magic potion" to summon whomever she wants too. Remembering that Shep was interested in best-selling author Sidney Redlitch and Gil uses the potion to bring Redlitch to New York.

When Shep returns home from his date with Merle, he sees flames in Gil's apartment/gallery. Alarmed by the fire, Shep walks in and Nicky and Queenie call it an evening. Gil offers him a glass of Christmas cheer. Then picks up her magic cat Pyewacket and casts a magic spell on Shep.

After a magical night together, Shep feels "spellbound" and later that morning, Shep breaks off his engagement with Merle, who does not know what to think.

Later, that morning when Shep goes to his office, he finds the authority on witches, Redlitch sitting in the waiting room, confused and wondering why he is in New York to discuss his new book. Not believing in witches Shep is skeptical. When Redlitch mentions that witches hang out at the Zodiac Club, Shep invites Redlitch to have a drink with him and Gil at the Zodiac that night to see if Redlitch really can spot a witch.

After, Redlitch shares his new book idea with Gil, Gil tells Nicky to do whatever he can to stop the project. When Nicky, walks home with Redlitch, he offers to help him with his book for fifty percent of the profits. When Nicky informs him that he is a warlock and wants to help Redlitch. The author is skeptical until Nicky, casts a spell that makes the street light flash on and off.

When Shep proposes to Gil one night, at first she worried about losing her magical powers, but quickly reconsiders and accepts Shep's proposal. After Gil informs Nicky that she plans to renounce witchcraft and marry Shep, he does not believe her. Not wanting Shep to find out that she was a witch, Gil then asks Nicky to stop helping Redlitch, and when he refuses, warns him that she is going to put out a spell to stop the book from being published. Gil puts a hex on Redlitch's manuscript, causing Shep to throw it in the garbage.

Feeling guilty about using her powers on Shep, Gil confesses to him that she is a witch and Nicky a warlock, but he thinks she is joking. As Shep is thinking that it might be true, he runs into Queenie, who confirms that Gil put a spell on him to spite Merle. Shep then confronts Gil, demanding to know if she ever loved him. After storming out of the gallery, Shep goes to the Zodiac to talk to Nicky and Redlitch. 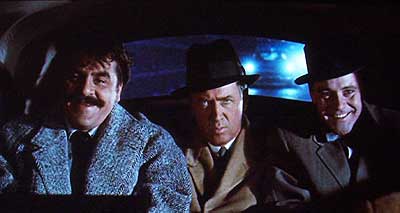 They drive him to the home of Mrs. Bianca De Pass, a sorceress, who mixes a potion to break Gil's spell. After drinking the potion, Shep returns to his apartment to pack a suitcase. Stopping at the gallery, Shep hands Gil a broom and says goodbye. When Gil threatens to put a spell on Merle, Shep runs to Merle apartment to warn her, but she thinks he has lost his mind.

As Gil prepares to cast her spell, she can not find Pyewacket anywhere. When Queenie returns Pyewacket to Gil, the cat runs away from her and as Gil begins to cry, she realizes that she has lost her powers. Concerned about her niece, Queenie decides to come up with a plan to reconcile Gil and Shep.

One day, Pyewacket unexpectedly jumps through Shep's office window. When Shep brings the cat back to Gil at her gallery, he finds that the primitive masks have been replaced by beautiful shells. Will he have a change of heart?

As always Jack Lemmon is very funny, in a supporting role as Gillian's brother. Janice Rule, is perfect as the snobby ex-college rival of Gillian. Ernie Kovacs, was perfect as the eccentric author. Lanchester and Gingold, are always wonderful in whatever film they are in. Kim Novak's cool personality was perfect to play the part as Gil . Also.. loved her wardrobe. 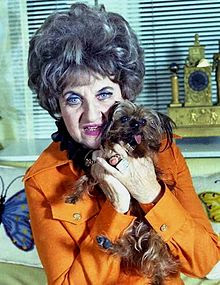 Hermione Ferdinanda Gingold ( 9 December 1897 – 24 May 1987) was an English actress known for her sharp-tongued, eccentric persona, along with her deep voice, caused by vocal nodes which her mother encouraged her not to remove. Gingold was also known for her unruly hair. It was said she styled it by sticking her head out the window and letting the wind style it.

In the 1930's, her quirky personality became well known through musicals. She married British publisher Michael Joseph in 1918, with whom she had two sons, Stephen and Leslie (1925).

After the couple's divorce in 1926, she married writer and lyricist Eric Maschwitz, whom she divorced in 1945.

After she moved to the United States in 1951, her first engagement was in, It's About Time.

In December 1953, she opened in John Murray Anderson's Almanac which made her an instant Broadway success and for which she won the Donaldson Award in 1954.

She won a Golden Globe Award for Best Supporting Actress for her performance in the film Gigi(1958) in which she played Madame Alvarez, Gigi's grandmother. She sang "I Remember it Well" with Maurice Chevalier.

Gingold soon followed this with the film Bell, Book and Candle (1958).

In October 1963, she opened in Arthur Kopit's Oh Dad, Poor Dad, Mamma's Hung You in the Closet and I'm Feelin' So Sad, playing a possessive mother who is driving her son crazy. She also played this role in London.

Also, was part of the original 1973 Broadway cast of A Little Night Music in the role of the elderly Madame Armfeldt, a former courtesan, this time Swedish, which she reprised in London (1975) and in the unsuccessful film version of the musical (1977).

In 1977, with conductor Karl Bohm, she won a Grammy Award for Best Album for Children for Prokofiev: Peter and the Wolf and Saint-Saens: Carnival of the Animals.

She was a regular guest on television talk shows: Jack Paar's and Merv Griffin's Show.

New York area TV audiences saw her in a ad for Coco Goya, a coconut drink made by Goya Foods. In the commercial, she's dressed to the nines and reclining on a chaise lounge and shaking two cans of the drink like maracas! 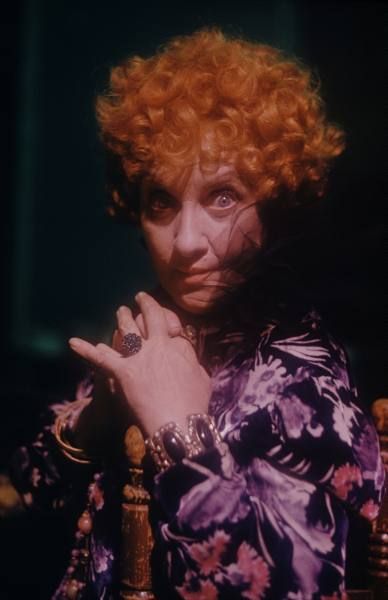