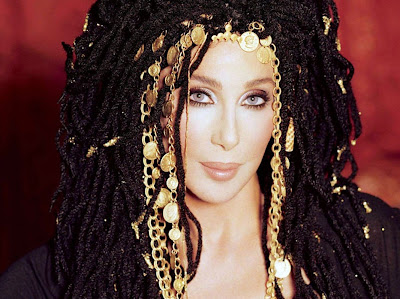 Cher(born May 20, 1946), is best known for her famous contralto singing voice and for having performed in many areas of entertainment. Also, she seemed to know that her style was just as important as her singing ...

Crouch, dreamed of an acting career while working as a waitress. She changed her name to Georgia Holt and landed minor roles in films and on television. Holt secured acting parts for her daughters as extras on the television show, The Adventures of Ozzie and Harriet.

Cher's family first noticed her creativity when in the fifth grade, she produced, directed and choreographed a bunch of girls in the musical, Oklahoma!. She could not convince the boys to participate, so.. Cher acted the male roles and sang their songs. 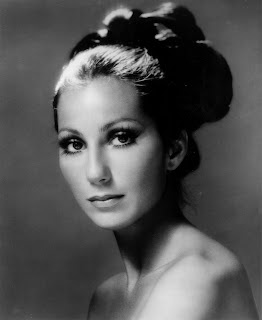 Cher's early role model was Audrey Hepburn, because of her role in the 1961 film Breakfast at Tiffany's. Cher began to pattern her outfits and behavior after character portrayed by Hepburn.

Cher has appeared in comedy, drama and romance films. She has appeared in thirteen films, including two as a cameo. She has also appeared in one starring theater role, numerous television commercials and directed a piece of the motion picture, If These Walls Could Talk in 1996 and some of her music videos of the Geffen-era in late 1980's and in early 1990's. Cher has starred in various international television commercials, as well as high profile print advertising for Lori Davis (1992).

Video: The Tonight Show interview with Sonny and Cher, with a surprise visit from Goldie Hawn. 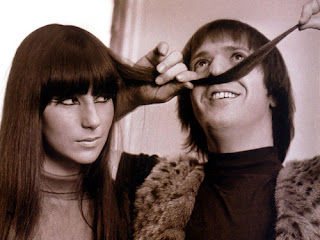 Before she started her film career, she had a couple of hits in the 1960s, as a solo artist, and with her ex-husband Sonny Bono as the couple... Sonny and Cher.


Her first appearance as an actress was in 1967 in the television series, The Man from U.N.C.L.E. as the model Ramona.


That same year, she started her film career with Sonny Bono in the film Good Times. Put together in a similar style to the musical duo's TV show "The Sonny and Cher Comedy Hour". When Sonny gets offered a role in a movie, he talks Cher into giving it a try. The proposed script, however, turns out to be not very good. Sonny has ten days to come with his own script. The film follows his daydreams as starring as a Wild West sheriff, a jungle king and as a private eye.

Video: A clip from the film Good Times.

Later, she performed as a solo actress in the low budget film, Chastity.

She made her Broadway debut in Robert Altman's, Come Back to the Five and Dime, Jimmy Dean, Jimmy Dean in 1982. The play was a critical and commercial success and Cher received strong reviews for her stage work and paved the way for her to be cast in the film version the following year, that garnered her a Golden Globe nomination. 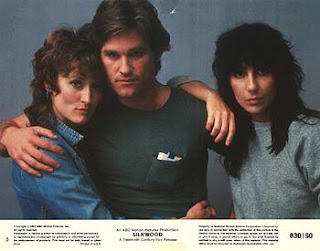 She was next cast with Meryl Streep and Kurt Russell in the drama, Silkwood, (1983) directed by Mike Nichols, inspired by the true-life story of Karen Silkwood, in which she performed very well in her very unglamorous role as a lesbian, who worked in at the Kerr-McGee plant in Cimarron, Oklahoma. 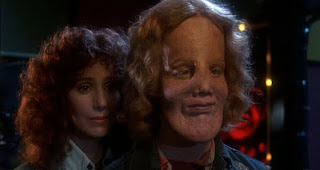 Cher then appeared in the drama, Mask (1985) directed by Peter Bogdanovich and with Eric Stoltz, Sam Elliott and Laura Dern. The film is based on the life and early death of Roy L. "Rocky" Dennis, a boy who suffered from craniodiaphyseal dysplasia. The film was considered her first critical and commercial success as a leading actress and firmly established her as an actress. For her role as a mother of a severely disfigured boy, Cher won the Best Actress prize at the Cannes Film Festival. 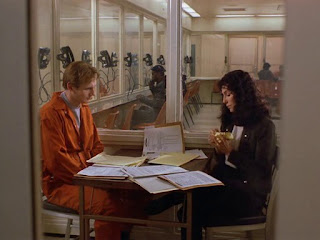 The thriller, Suspect, with Dennis Quaid and Liam Neeson. A story begins when a judge commits suicide and his secretary is found murdered. A homeless deaf-mute man, is arrested for her murder.

Public defender Kathleen is assigned by the court as his lawyer. She wants to find the real killer and gets help from the congressional advisor, Eddie Sanger who is called to be on the jury panel.

Together they discover a dangerous circle of corruption in high places.

The film has been credited for the high quality of acting despite the severe loopholes of the story. Cher, in the lead role, received positive reviews. 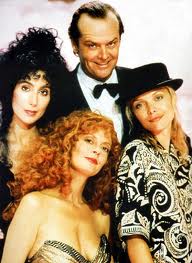 One of my favorite Cher films, The Witches of Eastwick, with Jack Nicholson, Susan Sarandon and Michelle Pfeiffer. A story about Three single women in a small town, who have their wishes granted. At a surprising cost, when a mysterious man arrives in town. 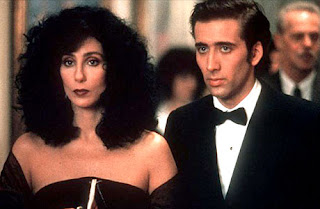 The romantic comedy Moonstruck, with Nicolas Cage and Olympia Dukakis. The story is about Loretta Castorini, a book keeper from Brooklyn, New York, who finds herself in a difficult situation when she falls for the brother of the man she agreed to marry the best friend of her late husband who died seven years before. Moonstruck is also her most commercial success to date. 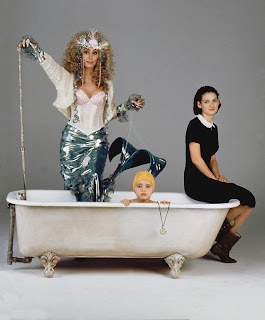 During 1989-1991, Cher refused roles: The War of the Roses, Thelma and Louise and The Addams Family for the Richard Benjamin's Mermaids with Bob Hoskins, Winona Ryder and a then 9-year-old Christina Ricci. A story about an unconventional single mother, who relocates with her two daughters to a small Massachusetts town in 1963, where events and relationships both challenge and strengthen their family bonds.

Cher made cameo appearances in the Robert Altman films The Player (1992) and Pret-a-Porter (1994). 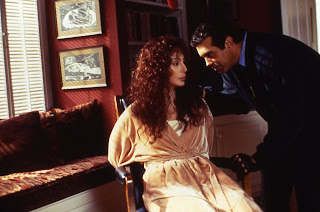 She starred in the poorly-received film Faithful (1996) with Ryan O'Neal and Chazz Palminteri. In the role of a depressed housewife whose husband is having an affair contemplates suicide, but changes her mind when she faces death by a killer hired to do it for her. 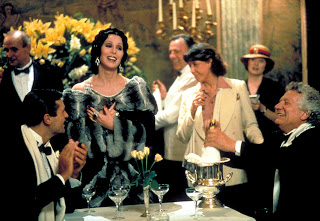 Then, later in 1999, Cher co-starred in the well-received Franco Zeffirelli film Tea With Mussolini, with Judi Dench, Maggie Smith, Joan Plowright and Lily Tomlin. A Semi-autobiographical tale from the early life of director Franco Zeffirelli. An illegitimate child is raised by an Englishwoman in pre-WWII Fascist Italy, part of an English community in Florence presided over by a diplomat's widow. Elsa Morganthal Strauss-Armistan is a wealthy American collector of modern art who visits "Scorpioni" on occasion. 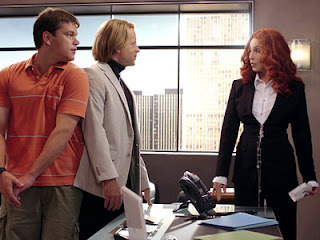 She was also seen, in the Farrelly Brothers comedy Stuck on You (2003), with Matt Damon and Greg Kinnear, who play Bob and Walt Tenor twin brothers, who share a liver. Thanks to their teamwork, being conjoined twins is not a handicap to them. But, when Walt's dreams of stardom of acting on the screen and Bob's shyness clashes, they both begin to fall out. This doesn't help when Bob's Internet girl arrives in town, unaware of their handicap and when Walt gains his own TV show with Cher. 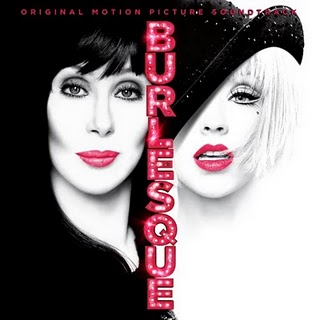 I also love this film about a small-town girl, who goes to Los Angeles and finds a spot in a neo-burlesque club run by a former dancer. 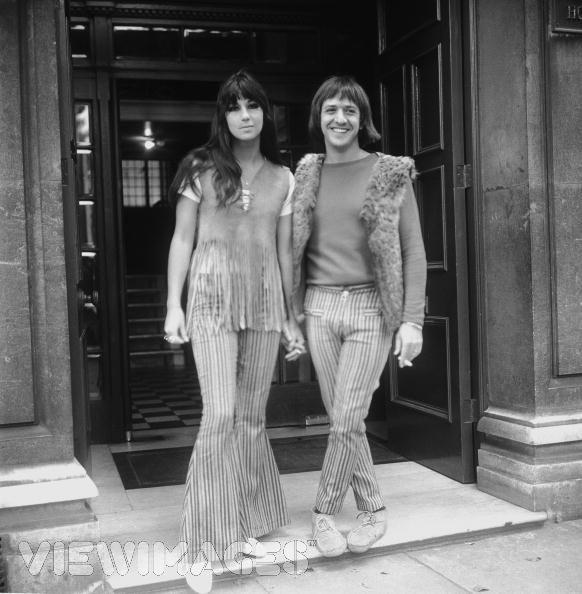 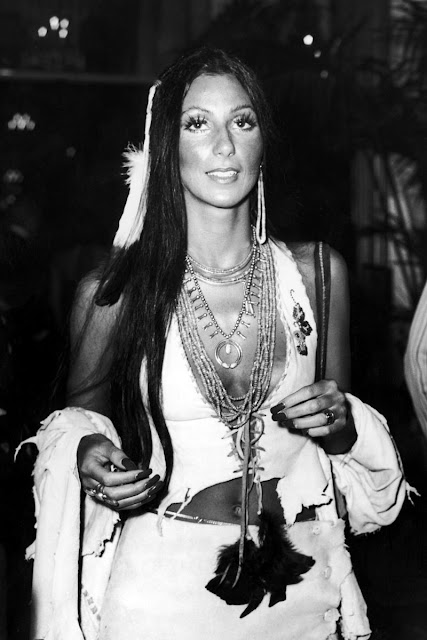 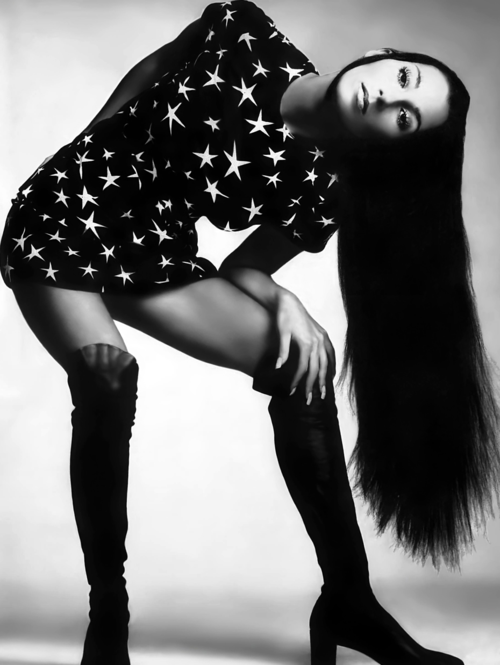 She began working as a model in 1967 for photographer Richard Avedon, after the modeling industry discovered her. 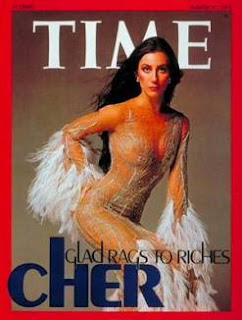 Avedon took the famous photo of Cher in a beaded and feathered nude gown for the cover of Time magazine in 1975. 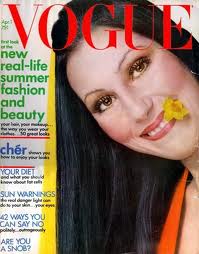 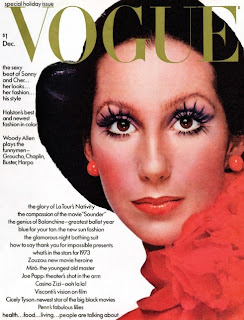 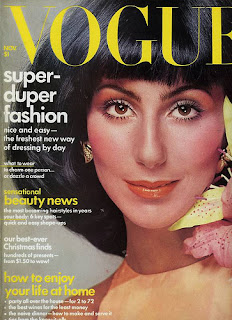 Cher has appeared five times on the cover of Vogue magazine, between 1972 and 1975.

Through her 1970s television shows, she became a sex symbol with her inventive and revealing Bob Mackie-designed outfits, and fought the network censors to bare her belly button. She was noted as the first woman to expose her belly button on television.

Cher is also known for wearing wigs ever since her 1970's TV shows. In 1972, after she was featured on the annual "Best Dressed Women" lists, Mackie stated: "There hasn't been a girl like Cher since Marlene Dietrich and Greta Garbo. She's a high-fashion appeals to people of all ages.

She can stand there in the wildest garb and get away with it. It's fun to watch a performer who is so connected with fashion."

In May 1999, after Cher was honored by the Council of Fashion Designers of America with a special award for her influence in fashion.

She was the world's Barbie doll, a living fashion fantasy week after week on TV, who landed simultaneously on best and worst dressed lists. 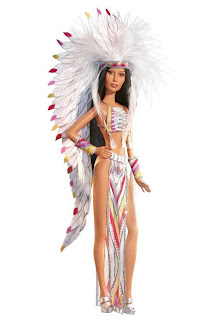 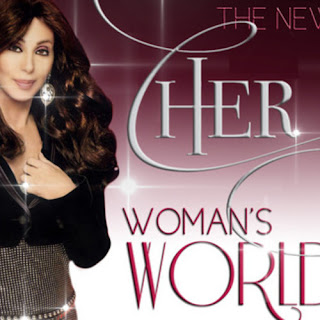 At the end of February 2013, Cher made an announcement on Twitter that the record company rescheduled the album's release for September.

Still untitled, the album received production from hip hop musician Timbaland and songwriting from Pink and Lady Gaga. Please go to Cher's website. to learn more about what she is doing now. 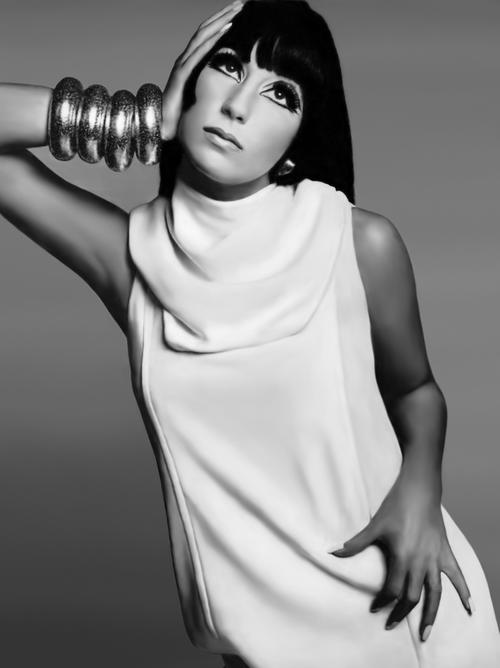