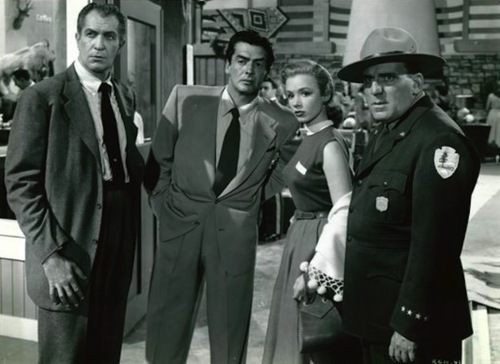 Gangster Johnny Yonkers, is charged with Battaglia's murder but plans to plead self-defense. Knowing that the district attorney is looking for the eyewitness, Johnny, hires someone to find the woman, who saw him kill piano player named Battaglia and kill her too.

Matt Hallett, arrives at Montana's Glacier National Park and checks in at the resort hotel. There, Matt meets, Indian girl Mary Tiller, park ranger Joe Parker and Paul Adams, a commercial photographer. Next, Matt sends a telegram to New York stating that "our friend is here."

Later, that evening, dressed in their western wear.. Matt takes Mary(dressed in a evening gown) to a dance, which is being held in beautiful home, built into the side of a mountain. As Paul, who came with Louise, dances with Mary, Parker shows Matt a wanted poster for Mary's father Katoonai, who is wanted on murder charges.

Later, Matt asks Louise to dance, but when the song "One for My Baby" is played on the jukebox, she gets a weird look on her face.

Soon after, an avalanche slides onto the house, causing the power lines to explode. To avoid a fire, Matt climbs the electrical pole and disables the power. Everyone, calls him a hero. Paul says that "he is braver than he thought" after an older woman insist on giving him a kiss on the lips.

The next day, during a Blackfoot ceremonial dance, Matt and Louise, go for a walk and he takes the opportunity to ask her about her relationship with Paul and why she was so upset by the song. But, they are interrupted by Paul, before she can answer.

Later that afternoon, Mary receives an award at the elementary school she once attended, but when she sees her proud father watching from a trap door in the ceiling, she faints.

That evening, at the hotel bar, Johnny posing as a guest, warns Paul that the gangster wants to kill Louise and gifts him a gun. Paul, goes looking for Louise and asks her to go for a ride, but.. before they can leave, Parker asks him and Matt to help fight a forest fire. As they battle the fire, Matt saves Paul's life.

Returning to the lodge, Paul, pretends to be concerned about Louise looking for an opportunity to kill her. Matt, is called to the phone before he can stop Louise, from driving away in Paul's car. After, getting off the phone he informs Park Ranger Parker, that he is a New York detective and needs his help in arresting Paul.

As Paul and Louise drive along a mountain road, a bulletin comes over their car radio, warning that Paul is a dangerous gunman. Louise, jumps out of the car and Paul tries to run her over. Falling over the embankment, Louise is not harmed and is able to pull herself back onto the road, where she is picked up by a passing motorist and taken to the ranger station.

Paul, rushes to Mary's room and informs her that the park rangers want to arrest him. Claiming that his car was stolen and used in a robbery. Paul then asks Mary to help him to leave the park.

Matt, takes Louise for a romantic boat ride on a lake and after confessing that he has fallen in love with her, asks her to testify against Johnny.

After returning to the lodge, they find a note from Mary, who writes that she is headed for New York. Thinking that Paul and Mary, are hiding in a Indian cave called Cave of the Winds.. even though the trail is very dangerous, they go looking for them. Along the way, they meet up with Katoonai, who believes that Mary and Paul will have to travel across a dangerous glacier to leave the park.

Katoonai, has Matt distract Paul with gunfire while he climbs onto the ledge above. Paul sees Katoonai and shoots him, sending him to his death. Paul, throws Mary against the rocks, forcing her to continue on.

While Mary struggles with Paul, he looses his gun in the snow. Matt then jumps Paul and as the two men are fighting, Louise reaches for the gun, she slips and falls on to a ledge. Will the park rangers get there in time to save Mary and Paul?

What I enjoyed most about Dangerous Mission, is the great location cinematography of Glacier National Park where it was filmed. My favorite scenes are when.. the landslide slides into the beautiful hillside home and when Victor Mature, goes out and takes on a downed power line. Also, the final chase scene across the glacier is also exciting to watch. There is something about the actress, Piper Laurie that reminds me a little of Debbie Reynolds. This is a must see for all Vincent Price fans. 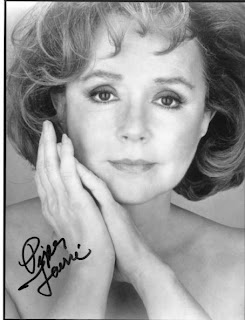 Her breakout role was in Louisa, with Ronald Reagan (whom she dated a few times before his marriage to Nancy Davis.

Discouraged by the lack of substantial film roles, she moved to New York to study acting and to work on the stage and in television. She performed in: Twelfth Night, produced by Hallmark Hall of Fame and Days of Wine and Roses.

She was again lured to Hollywood by the offer to co-star with Paul Newman in The Hustler(1961). She played Newman's crippled girlfriend, Sarah Packard and for her performance she received an Academy Award nomination for Best Actress.

After The Hustler, she and her husband moved to New York State. She accepted the role of Margaret White in the film, Carrie (1976) and received an Oscar nomination for Best Supporting Actress for her performance in that role.

After her 1981 divorce, Laurie moved back to California. In 1986, she received a third Oscar nomination for her portrayal of Mrs. Norman in Children of a Lesser God. That same year she was awarded an Emmy for her performance in Promise, a Hallmark Hall of Fame television movie.

In 1965, she starred in a Broadway revival of Tennessee Williams' The Glass Menagerie.

She had a featured role in the Off-Broadway production of, The Destiny of Me in 1992 and returned to Broadway for Lincoln Center's acclaimed 2002 revival of Paul Osborn's Morning's at Seven.

In 1964, she performed in two medical dramas: The Eleventh Hour episode "My Door Is Locked and Bolted", and Breaking Point episode "The Summer House".

In 1990-91, she starred as the devious Catherine Martell in the television series, Twin Peaks.

In 1998, she performed in the sci-fi thriller, The Faculty.

She made guest appearances on television shows:  Frasier, Matlock, State of Grace, Will and Grace, Cold Case, and Law and Order: Special Victims Unit.

She returned to the big screen for independent films: Eulogy and The Dead Girl. 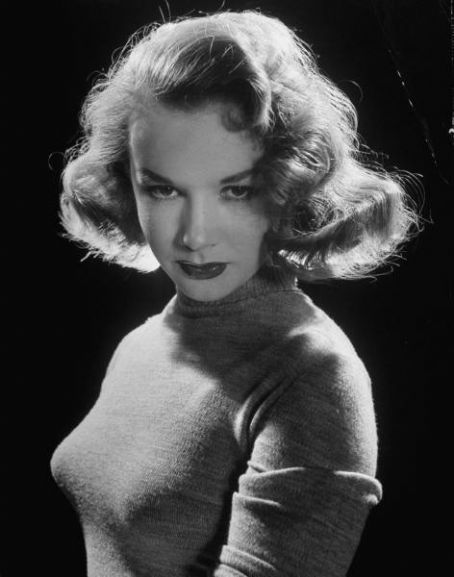